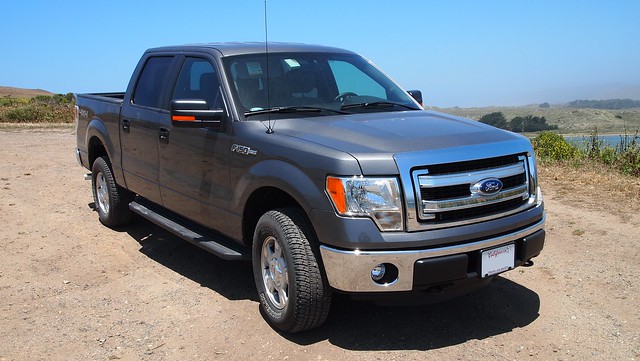 A statement of one’s potent masculine capability but may be too manly for some. 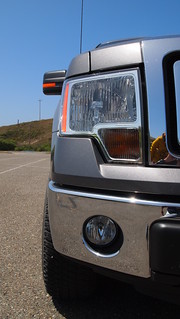 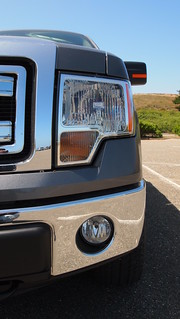 Our friend, John Doe (JD), is a commoner who lived in bread-and-butter sedans in his academic training days. By ordinary progression in life, he settles down happily into a soccer mobile. By default, his masculinity usually demonstrated in the paternal figure in the youth soccer practice. To JD, manly truck sounds just as bad as hand ball.

What JD doesn’t know, manly is defined as possessing qualities, and characteristics such as strength and courage for a homosapien with the intromittent organ. Truck is a heavy-duty motor vehicle, with live axle, body-on-frame with real four-wheel-drive system, and designed for carrying or pulling heavy loads to support the activities of a manly person including helping JD on home improvement projects.

Lets see if we can convince JD to ditch the soccer mobile by physically strapping him into the cockpit of a manly truck, and administering a little magic blue pill to man him up.

The F-150 to Ford is the soccer ball to soccer player. The F-150 is dated back to the 1940’s, and has been the best selling vehicle in both Canada, and United States markets. It has a lot more heritage than any soccer mobile. 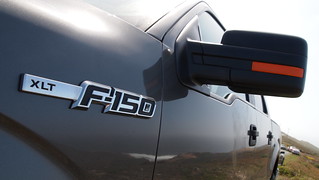 In 2013, the F-150 is available in XL, STX, XLT, FX2/FX4, Lariat, King Ranch, Platinum, Limited and SVT Raptor trim levels, where the XL is the base workhorse for fleets, the FX2/FX4 are for fun seeking individuals, from the Lariat and up are focused on cosmetics/high-end luxury equipments to fit customers exclusivity interests including 22” rims, red leather interior, and representing oneself as a farmer. The SVT Raptor is the fearsome 440hp high-performance truck. In this trim matrix, along with two bed lengths and two cab styles. Ford claims there are 650,000 ways to configure an F-150.

The one JD will be experiencing is the XLT. It is the everyday kind of truck, more down to earth yet it equips with most, if not all, electronic human-machine interface features contain in a soccer mobile.. Our tester in Pale Adobe color is one of the 650,000 configs with SuperCrew cab on short bed with the 5.0L V8, and 6-spd AT powertrain. It has $41,945 MSRP including destination fee. 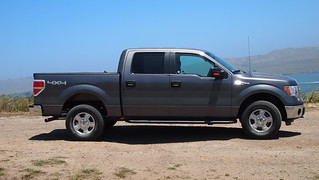 Yup. That’s what she said.

JD noticed the F-150’s manliness as soon as approaching the F-150. It’s sheer 6.5′ girth fit snugly in a parking stall with barely enough room on the sides. Its 19.3′ length butts against the very top of the wheel stop while the other end is protruding out.

Getting inside the F-150 requires the use of side running board for these lack of length. For the properly built, a hand on the handle bar at the A-pillar is all it takes to hop in. The cockpit has man-size buttons. The column mount shifter is what she had said – big.

With a flick of the key, the bores fire up with a twist to the manly body as the rods going up and down, up and down. The rush of lubricating oil flows to the heads. By now, I hope the magic pill is also pumping the much absent flow to JD’s organ. 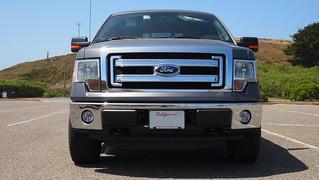 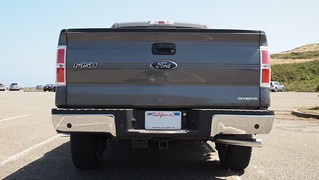 What JD is up against is a camping trip to Bodega Bay on the beautiful California coast. He will experience the 9’ narrow lanes in rural Marin County with quick elevation changes, and low speed corners, high speed Bay Area Freeways, congested Richmond District of San Francisco for the on-street parallel parking, and a quick spin in our standard test route. He will be clocking close to 400 miles at the end of the journey. 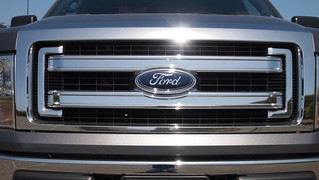 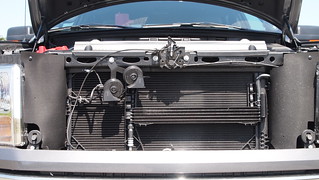 In the frontend, the massive chrome front grille is integrated with the aluminum hood. As the hood opens upward, the grille goes with it making repair work easily accessible. Aerodynamic aids such as plastic linings between the bumper and radiator support to divert air to the radiator along with lower splitter to manage under carriage air flow are unveiled. Looking beyond these aerodynamic enhancing details is the Coyote 5.0L V8 engine. 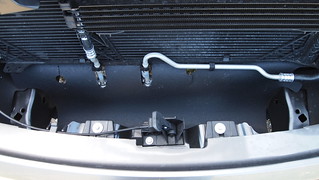 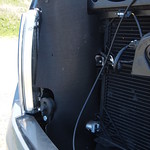 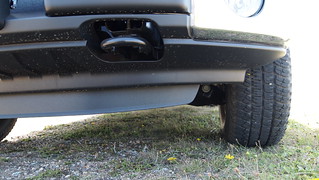 This engine shares majority of the architecture with the Mustang GT. In the F-150 tune, the intake cam profile is less aggressive, compression is lower to 10.5:1 to enhance low-end torque, and to accommodate the use of regular fuel. Additional oil cooler, and cast iron exhaust manifolds are utilized for durability. This engine is also flex-fuel rated for political reasons. 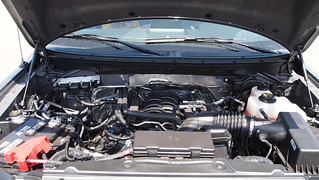 The Coyote Engine Family
The Coyote engine family won Ward’s 10 Best Engines in 2011 in the Mustang GT. This engine was intended to compete with Chevrolet’s 6.2L LS3 engine in the Camaro SS. But with only 5.0L, it takes advantage with the higher revs to produce roughly the same amount of horsepower as the LS3.

The engine is developed by a British engine programs manager at Ford, and features 32-Valve DOHC with Ti-VCT. It stands for Twin Independent Variable Camshaft Timing. The system is Cam-Torque Actuated, a Ford nomenclature, rather than relying on oil pressure to control the timing for intake and exhaust valves independently to improve fuel economy under light load while optimize power, enhances driveability and responsiveness across the wide power band.

The strengthened block contains 92.2 mm x 92.7 mm almost square bore and stroke ratio. Forged-steel crank, and piston-cooling jets are used to support its high revving nature. The intake ports in the new cylinder heads outflow the Ford GT engine by 4%, according to Ford. This all-aluminum engine combined with the composite intake manifold reduced the engine weight by 70 lbs compare to the previous 5.4L Triton V8.

As the result, this built in the Essex Engine Plant at Windsor, Ontario produces 360 hp @ 5,500 rpm, and 380 lb-ft of torque @4,250 rpm. It was reported that a similarly equipped F-150 dyno’d at 311hp, and 325 lb-ft at rear wheels, representing 18% drivetrain loss. Not bad for live axle rear end with long driveshaft. This also proves the efficiency of the transmission.

This engine is a modern piece of machinery. It loves to rev to its 7,000 rpm redline with smoothness. Power may seem opposite to where you want it in a truck on the spec sheet. A jab on the lag-free throttle at idle speed sends the rear tires spinning. Proven ample of torque is available. It is very untruck-like as power continues to build in intensity as the tachometer climbs upward. Engine doesn’t feel like the traditional lazy to rev Detroit iron. 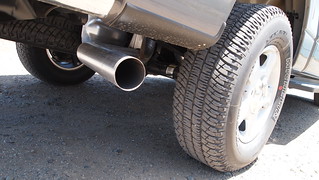 The exhaust note through the stainless steel exhaust is throaty, and snarl like a modern sports car. The muscle car deep, burbly note maybe missing, however, that won’t prevent you from wanting to to rev it more. The push you into the seat acceleration is addicting.

The 6R80 features Ford’s SelectShift technology to enhance driver control and provide as much control as an manual transmission. SelectShift allows two modes for the driver to keep the transmission in proper gear. When shifter is in “D”, mode 1 can be engaged by the “+/-” toggle switch on the shifter to reduce the range of available gears. This limit the use of higher gears when heavily loaded or while towing on grades. The second mode is selected in the “M” position, where full manual function is enabled and will hold gear at redline. Sounded a bit complex for JD, but all these operations are clearly presented graphically on the dash.

To make it easier for JD, leaving the transmission in “D” letting the truck sort itself out, we observed well orchestrated shifting, and in tune with the engine powerband. Thanks to its willingness in downshifting, it is always in right gear. Shift speed is not as immediate as a sports car nor sluggish like a retiree mobile. Some jerkiness was felt from time-to-time, particularly, when downshifting couple of gears due to lack of downshift rev matching. Overall, we are very pleased with the transmission.

To utilize the ample low end torque, the engine revs at about 1,650 rpm at 60 mph in top gear to promote fuel efficiency. Our observed fuel economy was 16.7 mpg which falls within EPA ‘s 14 City/19 Highway/16 Combined MPG ratings.

Before JD falls into coma, in simplified terms, all we are saying is this is one potent powertrain.