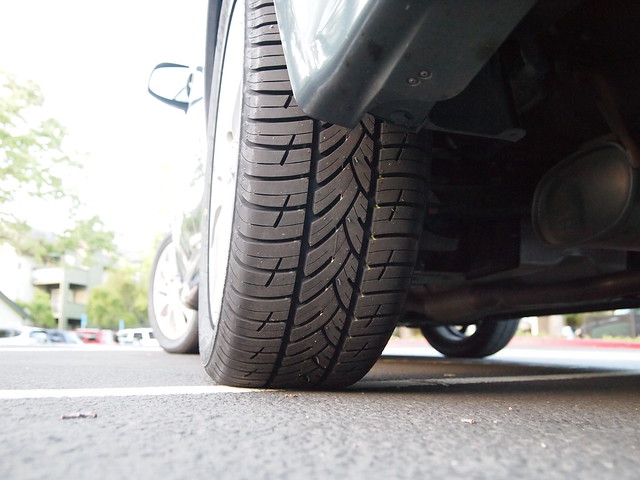 SX4 got some new shoes to show off. 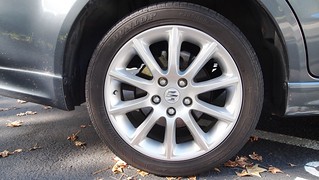 The factory equipped Dunlop SP Sport 7000 tires had turned 58 months old and covered close to 68,000 miles, or equal to going around the circumference of the earth equator 2.7 times, and also equivalent to completing over 56 million rotations.

All we have to say is these Dunlop had covered a lot of ground and we are quite pleased with their durability. Some tires require replacement at much younger age commonly due to excessive, uneven wear, and puncture. How long the tires can last depends on driving style, condition of the suspension, and alignment setting.

Dunlop is not beer belly. According to Dunlop, the SP Sport 7000 is high performance all-season radials developed for car manufacturers for their sporty sedans to provide ride comfort, low noise, good handling, and traction under dry and wet road also in light snow conditions. These made in Japan tires, have treadwear rating of 300, both temperature and traction ratings are at A with V speed rating. 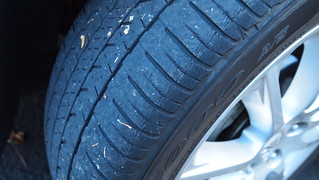 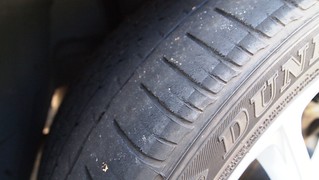 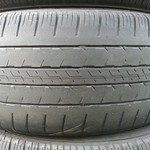 At the time of replacement, the original Dunlops still had some treads left but they were showing hairline surface cracks at the base of the tread grooves, and also on the sidewalls. These cracks are the aging process for any tires since they are subjected to environmental factors, such as, direct sunlight, acid rain, ozone, and also due to the heat /cold cycles, and stretches as they are being driven.

Sometimes these small cracks are just aesthetically displeasing but they can extend past the rubber’s outer surface. Since there is no easy way of knowing, and the heat cycle has also hardened the rubber to a point that ride quality had vanished. The car had became more and more choppy and harsh. The hard rubber also caused longer than expected braking distance.

As the treads wear down the tires are more vulnerable to puncture. We had gotten at least one foreign object (nail, broken glass, screw) embedded in each of the tires, thankfully, no puncture. 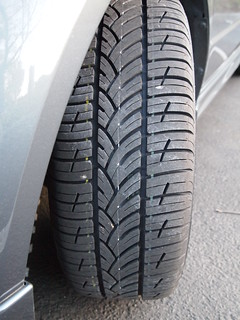 The SX4 is our workhorse. Our goals are reliability and economy so we can travel with a peace of mind, and keep the operating costs as low as feasible. The original Dunlop SP7000 was listed for $156 each online, and the least expensive one in the same all-season high performance category in the same original size (205/50R17) was the Sumitomo HRZ II for $75 each.

But then the idea came up, why don’t we try some wider tires since we are always looking for something else to try. After some research, the Fuzion HRi in 215/50R17 size was at $58 each.

Fu-who? Fuzion is a division in the tire giant Bridgestone/Firestone Corporation, and shares their Ultimate Network of Intelligent Tire Technology (UNI-T). The HRi is high performance all-season radials developed for the aftermarket segments for the drivers of sporty cars to provide ride comfort, performance handling, and traction under dry and wet road also in light snow conditions. These Thailand made HRi have treadwear rating of 400, both temperature and traction ratings are at A with H speed rating.

Without a second thought, Fuzion it is. A size wider and in the same performance category as SP7000. The total cost including shipping, taxes, and installation came out to $364.30. What a deal! 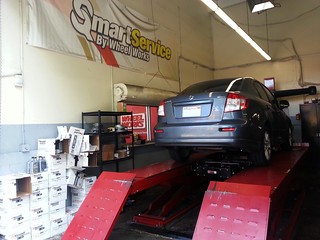 We ran these new tires for about 2,000 miles through our normal commute routes. The increase in sectional width promoted better cornering in the penalty of reduction in overall fuel economy. The observed average fuel economy has dropped from 32.5 mpg to 31.2 mpg – representing a 4% reduction.

The Quest for Understanding of the MPG Loss

It doesn’t take rocket scientists to understand that more tire contacting the ground, more friction there is, yet more lateral force it can generate. This new find grip is easily experienced as the cornering limits are now apparently higher.

The rolling resistance of the wider tires could affect fuel consumption. The tire width went from 205 to 215, representing a 4.9% increase.

It takes more material to add width, each tire is now 2 lbs heavier than the narrower Dunlop, and also increased the overall diameter by 0.3” (1.4%) since the profile remained the same at 50-series.

In our moment of inertia analysis, the added mass and diameter is equivalent to adding 67 lbs to the chassis at peak acceleration, and absorbing 8 lb-ft of torque that is devoted to acceleration.

This agree with our observation on the road. The harder we accelerate, the gas consumption increases at a greater rate than before. However, if we allow the car to coast more, gas consumption is generally better. Perhaps, due to taller tires has the longer gearing effect which lowers the engine rpm. Our calculation revealed that at 70 mph, the engine is turning 35 RPM less than before which we consider as insignificant to any fuel economy gain. 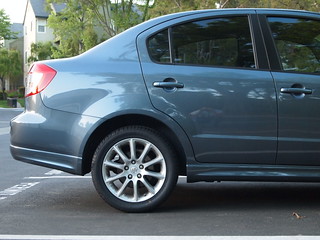 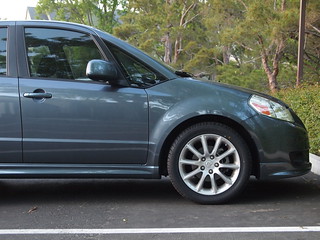 When overall diameter is bigger, the wheel rotates less per given distance in turn the distance traveled on the odometer will be equally less. As the result, the fuel consumption calculation will worsen as the same amount of fuel being consumed covers less registered distance. Therefore, the 1.4% difference in diameter referenced earlier should be applied back to the distance traveled for the fuel consumption calculation. However, the accuracy in this calculation is only as good as the accuracy in the speedometer gear in the transmission.

The opposite is also true. What if the manufacturer fit smaller diameter tires and then the MPG would magically get better? Remember the law enforcement allows plus or minus 10 mph error on the speedometer – so some variances are allowed apparently.

Not saying the manufacturer will pull a trick like this to artificially boost the MPG, but what if the speedometer gear is tuned to accommodate more than one set of tire and wheel package? You know how some optional sport package come with wider tires, and bigger wheels.

For instance, the Suzuki SX4 Hatchback comes with 205/60R16 tires of which they are 2.2% bigger than the sedan’s original, and the hatchback has the worst EPA MPG rating.

The Loss Conclusion – Your Mileage will Vary.

Precisely comparing fuel consumption calculation in the real world is a rocket science. The variables include the gas pump nozzle calibration, the way you fill up the tank, how you mimic the same driving environment based on the same weather and traffic conditions, how accurate your car reads the distance traveled…etc.

The fact is, our goal for better cornering grip, and getting the best tire deal were achieved. With that, just be happy as long as your MPG is not less than 5% of EPA’s MPG rating. Keep in mind that EPA rated our SX4 at 22 City/30 Hwy/26 Combined, and we are still above that with the bigger tires. End

Soon to come. Exploring ways to get the fuel economy back. 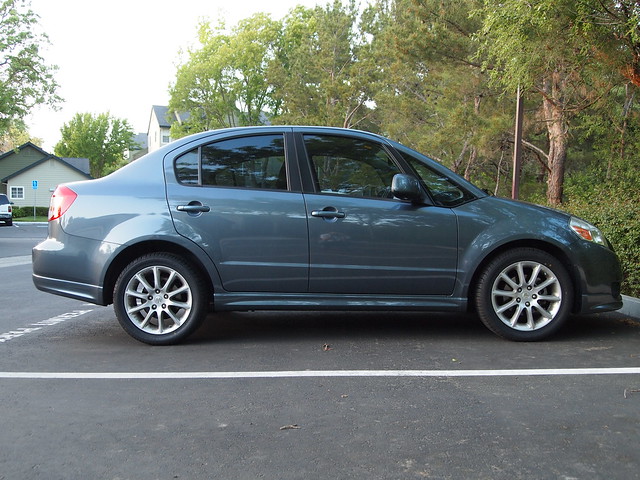