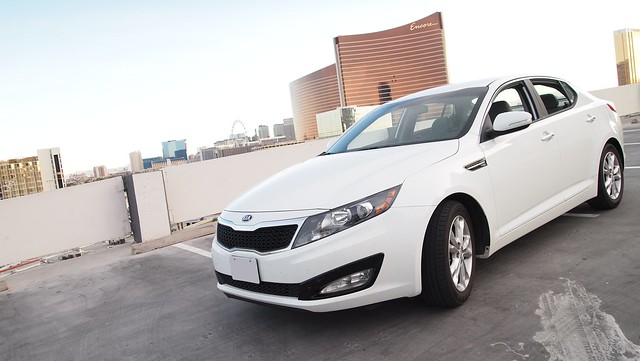 The new Optima have drastically changed. She is no longer ripened and wrinkly, nor a Plain-Jane that homogeneously blend into the stagnant sea of clones. The Optima is now the attractive Sexy-Sue. Sue even turns the heads of car enthusiasts.

Can this segment’s monogamy, traditional missionary, two-pump-chump (TCP) shoppers give Sexy-Sue a chance to work her way up into the cowgirl? Perhaps. 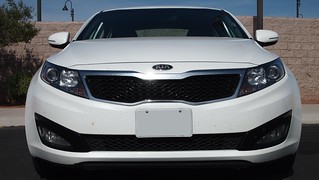 Background – The Cowgirl in the Making

What represented this momentous sale is the clean sheet redesign of the 3rd generation Optima. Kia introduced this all-new Optima (Chassis Code TF) at the 2010 New York International Auto Show, and went on sale shortly after as a 2011 model.

To further support the sleek sporty image, the hardware is also the forefront of the segment. Both the standard 2.4L and available engines utilize gasoline direct injection (GDI) technology. In lieu of offering an optional V6 engine, the top of the line SX model is powered by a 274 hp 2.0L inline-4 GDI turbocharged engine. A standard 6-speed automatic transmission accompanies both engines. 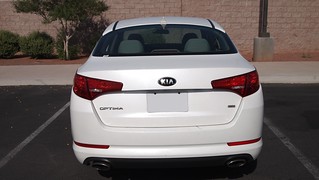 In 2013MY, the Optima comes in three model trims: LX (Base), EX, and SX. The notable optional packages available to the EX and SX trims are the Premium Touring, and Limited Package including panoramic sunroof with gloss black B-pillar, 18” wheels, LED daytime running lights, red brake calipers on 12.6” front brake rotors to black cloth headliner and pillar trim and air cooled front seats. A fully loaded SX trim has MSRP close to $35,000. A 36 city and 40 mpg highway Hybrid model was introduced in the later part of 2013.

Our built in West Point, Georgia tester is the LX model in Snow White Pearl paint. It has $22,665 MSRP including destination fee. It came loaded with standard equipments that a base model Camry can only dream of, such as, fog lights, dual exhaust, outside-mirror turn-signal indicators, heated side mirrors, cooling glove box, power lumbar support on driver seat, 17” alloy rims, two 12V auxiliary power outlets.

Impression – From Courtship to Offspring, the Mating Process Must Go Unnoticed. 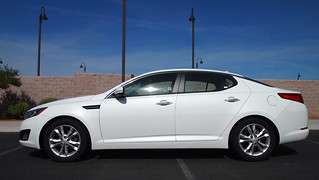 Contrasting the TPC mating process, the midsize sedan market only cares about going from point A to B totally ignorant at the interim process call driving. Similarly, car manufacturers are all about sales volume, all about low cost to produce. Profit is in the driver seat. These end result driven philosophies influences the deficiency of detail in designing and engineering a proper vehicle, and promotes the growth of bread-and-butter products to satisfy TPCs.

Car Enthusiast ain’t TPCs. We like to prolong the enjoyable experience. We will evaluate if this Kia Optima is it all look? Has it break out from the bread-and-butter point A to B norm? Entailing the actions behind the closed bedroom door.

Our 1,300 miles test drive takes us from San Francisco Bay Area via the desert highways to the idling Las Vegas Strip with a spin at our standard test route to illustrate how good Sexy-Sue handles the our kind of courtship. 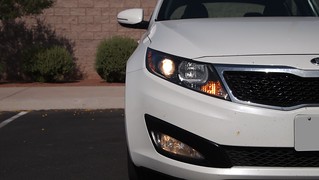 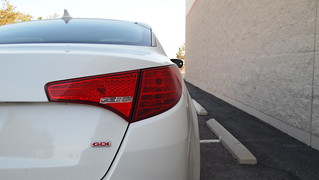 Sue is such an eye candy. Her wide stance, and sloped back roof line is unbelievably attractive. Both the front and rear end designs are elegant yet it won’t turn away the TPCs. She is still refreshing and stunning to look even 4-years after her debut. This perfectly executed design transformed the Optima from Plain-Jane to Sexy-Sue inside and out. 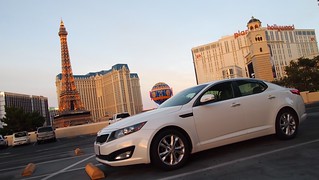 This character shaping styling is penned by Kia’s Chief Designer Peter Schreyer, who also influenced the Audi TT and the original VW New Beetle. In 2012, Peter Schreyer is ranked one of the 10 most influential people in the automotive business, and Honorary Golden Steering Wheel recipient in 2013.

Press the unlock button on the remote, the interior ambient light illuminates the passenger compartment with welcoming warm spectrum. Sue is inviting me in.

Inside. The 6-way adjustable front seat provides great comfort. The wide bolsters offer marginal lateral support. The long bottom cushion provides very good thigh support to more evenly distribute your body weight instead of a concentrated pressure point on where-the-sun-don’t-shine. Alright, I am in for the all-night-long long-haul.

Sue is nice to the touch at the right places. Soft-touch material are strategically placed at where your body would contact throughout the cabin. The center console and 4-spoke steering wheel has its own unique style; avoided the Mazda 6’s inspired by BMW feel. The center console is distinctively tilted toward the driver in at attention waiting for order.

Are Sue’s buttons easy to push? Yes. Switchgear are very intuitive to use, and well within reach. The buttons on the steering wheel are well organized – infotainment, gauge cluster info display, and Powertrain Eco mode buttons on the left, and on the right quadrant are the cruise control, and built-in phone. 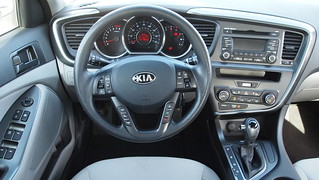 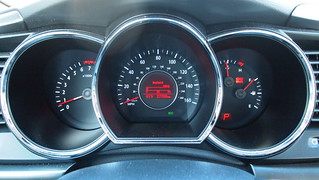 Gauge cluster is conventional mid-size sedan standard. The three pod gauge layout with tachometer on the left, a big speedometer in the dead center, fuel level, coolant temperature, and gear position on the right. Nothing comes more typical than this. The appreciable feature is the multifunction display in the center that has good resolution, and responsive. Overall, the interior design matches the elegance of the exterior. 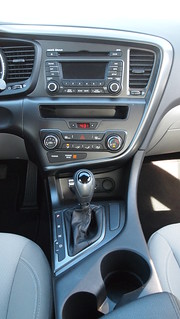 Driver-to-car interface in the mid-size segment is not as important as creature comfort. The potent AirCon turns the cabin into a freezer in no time under the LV heat. Cabin quietness meets the “must go unnoticed” segment standard. The dual exhaust emits absolute no exhaust note. Engine noise at freeway speed is non-existent. Wind noise is also kept minimal. The standard stereo system has solid bass, clear mid and high, and overall dynamic is average. Sirius XM, AUX/USB/Auxiliary input jacks, Bluetooth, and dual 12V outlets located just in front of the shifter supports the 21st century living. Attention to detail is noticeable.

TPCs tend to prefers larger sizes to fit their delusional larger-than-life needs. The Optima’s 190.7” overall length, and 110” wheelbase are text book standard for this class. To ensure she can swallow various shapes and sizes, the 15.4 cu-ft trunk, and 102.2 cu-ft passenger compartment volume gets the job done.

The “whump” produced as we close the door reminded us that her now 4-year old age still capable of earning an “Acceptable” rating from Insurance Institute for Highway Safety’s most recent front end small overlap crashworthiness test. Yet, the all-new 2013 Toyota Camry has gotten a “Poor”.

Twist the convention ignition key to fire up the cylinders. Lit up her projector headlights along with the halogen fog lights that spread excellent radiance in the dark desert sky. Baby, I’m as turned on as you. 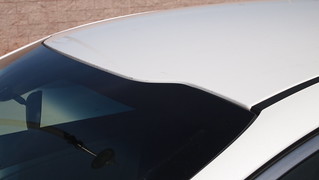 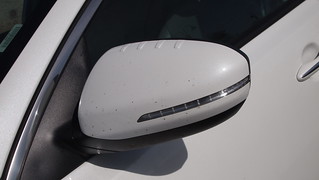