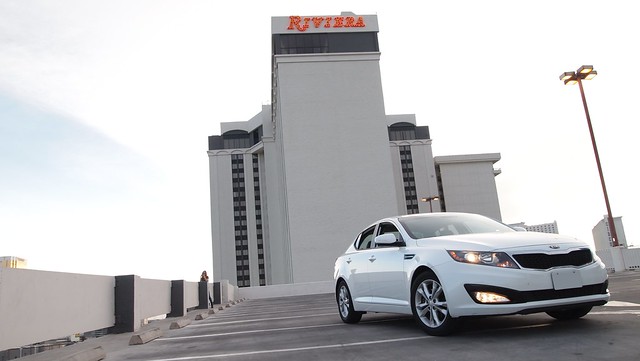 Behind Kia’s internationally acclaimed “Tiger Nose” front end is the latest iteration of the Theta II (Engine Code: G4KE) engine. This all-aluminum Alabama built 2.4L I-4 pumps out 192 hp @ 6,300 rpm, and 181 lb-ft @ 4,250 rpm in PZEV States like California. The output efficiency increases to 200hp and 186 lb-ft in non PZEV States. 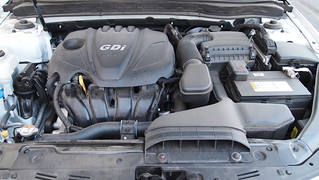 As the result, Theta II gained 9.7% in horsepower, 7.1% in torque, and 12% in fuel economy in the PZEV States. The Theta II is more than 10 pounds lighter than its predecessor even with the additional high pressure direct injection fuel system. Every ounce that you can shave off of the front end of a front wheel drive will improve its driving dynamics tremendously.

On spec sheet alone, this designed, and engineered in Namyang, Korea powerplant has higher specific output than the competitors. Namely, the selling-like-hotcake-for-no-reason Camry has weak sauce 173hp and 165 lb-ft. The Mazda 6’s 2.5L SkyActiv comes closer at 184hp and 185 lb-ft. The Optima is considered to be the sporty one. Its use of higher rpm to extract this higher HP output. 6,300 peak HP, 6,500 redline. It is maximizing the engine’s potential. Going with higher rev natural is applaud-able in this era. 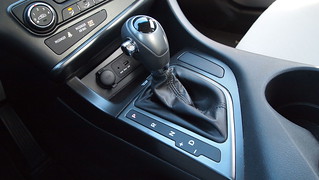 Under normal driving in “D”, it shifts smoothly. The transmission and engine calibration is done perfectly. Engine feels peppy all the time under any driving situations. We didn’t recall the time the engine fell out of power band.

Gas pedal has an on-and-off switch like rapid input. Similar to the previous generation, just barely touching the pedal particularly on the first half inch of the pedal travel, the car lurch forward drastically. Making it impossible to modulate. Under Eco mode, the tip-in rapidness is reduced but the bias is still there.

The throttle map also has a mind of its own. Downshifting from 5th to 4th on an incline. Keeping the same throttle input. Once in 4th gear, the car accelerate rapidly and unintentionally as if throttle body is at full open. Pressing the pedal further, there is no change in acceleration, or engine response. Perhaps, it is also to increase volumetric efficiency of the engine. 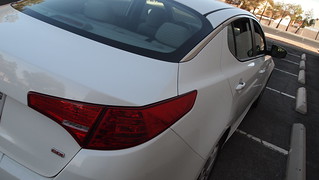 Apparently, these fatal flaws are probably something that Kia specially tuned for the American market. VW Group of America recently conducted a consumer survey in the U.S. market. The survey indicated that U.S. consumers prefer powerful acceleration from a dead stop while reluctant to move the right foot further into the accelerator. So the throttle mapping and shift points in the U.S. market cars are tuned such that most engine power is in the first 10-20 percent of the accelerator pedal travel. Completely contrary to the linear throttle that proper European driver seeks for.

So a flaw to us, the car enthusiast, is a must for the mass TPCs.

Actuating the tranny’s manual mode via the shifter unveil some other flaws. The automatic upshifts before the 6,500 rpm engine redline is a big disappointment since you want to be in full control if you are doing the shifting yourself. If the driver is too incapable to shift, I don’t think they are dare enough to put it in manual. On the same token, riding the rev limiter isn’t a bad learning curve for them. Fortunately, it won’t auto downshift. No rev matching downshift is slow and relaxed. This tranny just can’t be rushed.

Overall this powertrain is capable of propelling the 3,223 lbs Optima from 0-60 in 8.0 seconds, and reaches the quarter mile in 16.2 seconds at 89 mph. Coasting at 70 mph, the engine revs like a torquey V6 at the soothing 2,000 rpm in top gear. And it doesn’t lug the engine, if you need some acceleration from that rpm in same gear.

Cruise control is often used in our journey. We had to access the switch very often to cancel, or to adjust speed. Even we are in the middle of nowhere on I-5, there are a lot of traffic nowadays. The longest we were able to used cruise control was about 10 minutes. 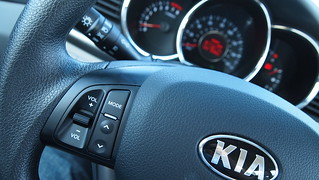 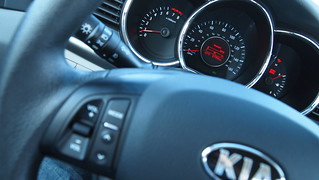 Overall, she has the hardware but just somewhat naily and teethy going at it which TPCs don’t usual notice since they don’t roll this way. 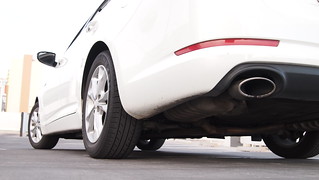 A relaxed fluidly lubed up ride is nice but the rapid farinaceous ones are soothing to the sensation too. Being able to find the balance between the two is the art.

During the initial driving, the car feels stable and light on its feet. Ride quality is the typical well-sorted midsize sedan like comfort. Riding in the car blindfolded using the other senses to feel the car. We have no idea which midsize sedan we are in. Lasting beyond the two pump stroke, the more time we spent in the Optima, we noticed the ride is comfortable yet supportive. No floating feel yet just firm enough without the abruptness, and can be considered sporty in this segment without the sports package.

The longer we go, we noticed how perfect the ride is for roads in California since the tuning is done at the Hyundai-KIA Motors California Proving Grounds here in California City where we passed by in our test drive journey. Under normal circumstance, the handling feels slightly sportier, and sharper than the current Nissan Altima since the Altima has gone soft.

The suspension components are mid-size standard issue – MacPherson front, multi-link with isolated spring and shock in the rear. Stabilizer bars are utilized at both ends. Even Mazda 6 is following this standard trend; no more double wishbone. Again, no need for this car segment. The TPCs will never know the differences between MacPherson and double wishbone. 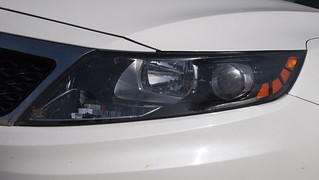 The Electronic Stability Control (ESC) incorporates Vehicle Stability Management (VSM), and Traction Control System (TCS). In default ESC mode, it kicks in extremely early with very apparent intervention. It will do all kind of things to prevent spirited driving. Entering a corner hot, the brake based VSM will prevent the tires from make a single squeal yet you can feel the chassis wobbling corner to corner as the brakes are working independently. Exiting some tighter corners under hard acceleration, the TCS will cut throttle input entirely off; like somebody knocks on the bedroom door during the courtship.

Pressing the ESC button to turn it off, the handling is more balanced, and showing some of the finesse in Kia’s chassis and suspension tuning. Frontend feels grippy. Initial turn-in is fairly neutral. Body roll feels balanced. But the OE tires is limiting the fun. It offers lower than expected grip, and gives out too early without much warning.

However, ESC OFF does not mean off here, the intervention is just more behind the scene. When approaching the limit, you can still sense the electronics sorting out things, yet doing a good job in keeping the car on the line. Perhaps, the ESC OFF setting should be the default setting, and off should just be that. Therefore, we couldn’t fully explore the mechanical limit of the car. However, we are quite pleased with the handling, and cornering ability in its ESC OFF setting.

On paper, the Optima produces 0.8 lateral g-force in a 300′ radius skidpad from a set of Korean’s own 215/55R17, Nexen Classe Premiere CP671 Grand Touring All-Season tires. The CP671 is like a school uniform for various Hyundai-Kia vehicles such as Soul, Sportage, Veloster, and Elantra. Tire noise is loud. Very loud at times. A clear cost saving. 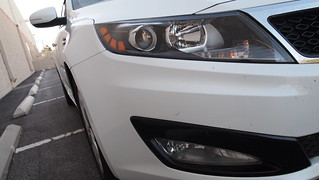 Switching to a different position, exposed the next letdown in the 2.94 lock-to-lock electric power steering. A lot of professional reviewed its twin, Hyundai Sonata, that its steering is like steering a boat in a bowl of defecate. There is absolutely no feel, no feedback, no weight on the wheel. We have also driven a Sonata, and agreed with the pros. In the Optima, the steering compartment has been improved. The steering weight and feedback are somewhat on-par with this market segment despite the thick tire sidewalls.

The on-center feel however is still artificial and vague. More so when traveling below 15 mph, in a conventional steering system, after you turn the steering wheel the front wheels will stay at that turned angle until the car is in motion before the steering goes back to center – using the caster in the suspension geometry. In the Optima, the steering automatically goes back to the center once you let go of the wheel without the car moving forward. This artificial on-center auto return is an strange experience.

On highway speed, memory steer is noticeable. Crank the wheel beyond the artificial on-center notch, the car will just follow this steering angle for eternity. Feel actually like older cars with worn out suspension bushings and pillow mounts.

TCP: “What. What. Should I try mounting her on the pillow?” 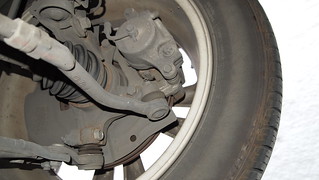 Brake Performance & Feel – Not Great but No Bad After Taste

Brake pedal is firm, but similar to the gas pedal, the initial input is overly sensitive. With our well calibrated foot applying the same constant pressure, sometimes the brakes seem to clamp harder than other times. Brake modulation is a term of the past.

Under emergency braking, braking distance feels longer than expected which is confirmed by the lengthy 186’ stopping distance from 70 mph. Blame the tires. No brake fade was observed. ABS involvement comes in as early as just lightly jabbing the pedal. Over reactive BAS anyone?

By now, TCPs are sound asleep. 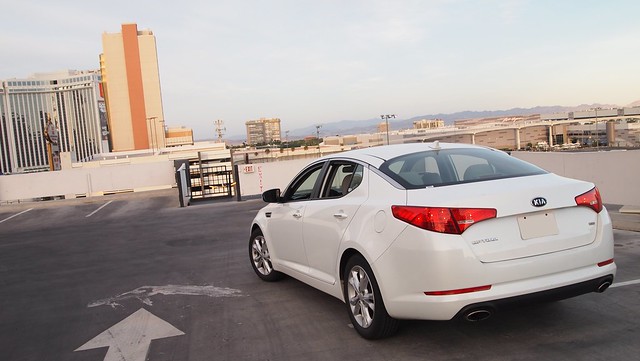 Overall, the entire courtship experience is like using the extended pleasure 0.02mm thick rubber. It has some sensation yet numbs the experience to avoid the inevitable two-pump-chump finish.

Sexy-Sue is far more unique and fun than Plain-Jane. Sue has the right ingredients to be the San Fernando Valley blockbuster cowgirl star once the naily and teethy attributes are tuned out. We certainty hope Sexy-Sue will soon make us, the Car Enthusiasts, TPCs as well. End.