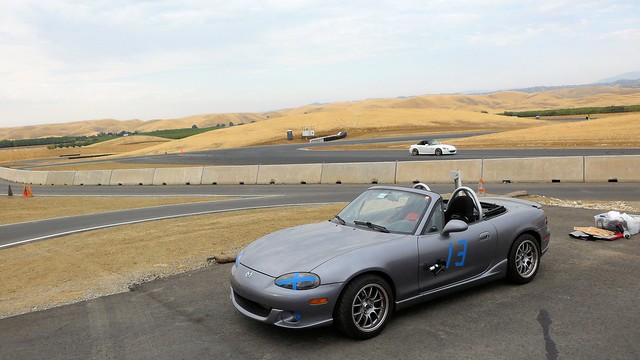 In a no wind 95-degree intensely sunny day, we went back to Thunderhill West for another day of track honing. The MSM wears a new set of Hankook Ventus R-S3 (Version 2) tires that were still in the break-in period.

The intermediate and advance run groups in the past SpeedCamp events used to be free-for-all; passing was allowed anywhere on the track with a point-by. It rarely had more than 20 cars in the same session. So things were more spaced out. Frequently, I found myself all alone out there and basically had the whole track to myself.

This year though things were completely opposite. Paddock was very crowded, and was packed by some have-seen-better-days family sedans, high horsepower 2-ton cowhide wrapped luxury cars, and some typical track day variants. This same crowd was out there on the track where a group of half dozen family sedans clogged the track in a Sunday cruise parade formation, while a few luxury tanks blasting down the front straight just to get behind another beater sedan then fully relying on their fancy traction control in the corners to save the day. As an compounding issue, regardless which run group, there were only two passing zones: 1) front straight, and 2) between the short segment of Turn 2 and 3. Point-by was also required. So SpeedCamp 2014 was a slow and frustrating track event.

Without further ado, check out the action pack below.

The only clear lap in the entire day where Sunday cruisers were not in my sight. The 1:41.40 second lap time is a joke due to: 1) the first session of the day on new tires on a new track, 2) a few mis-shifts, 3)I wasn’t really trying to push hard, and 4) some other excuses…

I have never received that many black flags in the same day. Two black flags in two separate sessions might only indicate how many Sunday cruisers were out on the track.

To calm myself down, MSM was turned into a moving tripod.

Then, enough was enough. Instead of waste track time, MSM rejoined the traffic jam at the track with a test driver on-board.