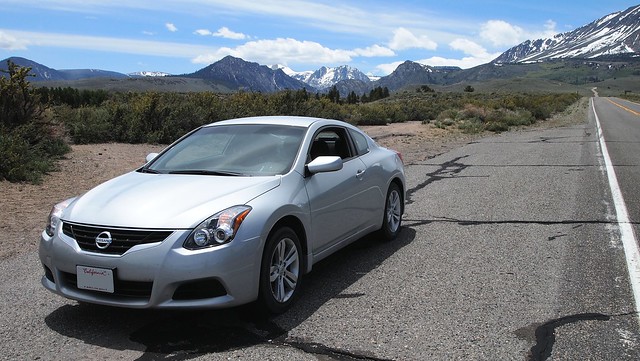 Searching for the Mentality of By-product Shoppers

Between 2010 and 2012, Nissan sold approximately 59,200 Altima Coupe in the United States, equivalent to about 8% of the Altima Sedan’s 742,000 units. The Coupe’s sale volume seem like a drop in a bucket, merely 2% of Nissan’s 3 million vehicles sales figure in United States alone in that same time period. 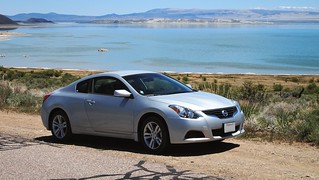 Why would Nissan being one of Japan’s big three car makers bother with such insignificance? Nissan is not alone though. In recent automotive history, coupes that were derived from a midsize sedan include Chevrolet Monte Carlo, Ford Probe, Honda Accord, Mazda MX-6, Oldsmobile Alero, Pontiac G6, and Toyota Solara; just to name a few. It is interesting to note that all of these models, except the Accord, had been axed.

To be profitable mainstream manufacturers can’t develop too many unique parts for the low volume products. The investments in engineering and development were made specifically for the sedan version. The components that are unique to the coupes tend have that not thought-out and under-engineered feel. The manufacturers have to rely intensely on component sharing which made some of these 2-door derivatives, including the Altima Coupe, nothing more than a by-product.

Then what attracted the consumers who took home the Altima Coupe? Let’s find out. 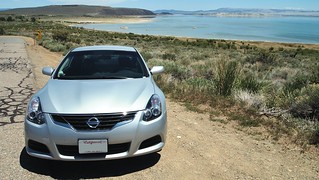 The Altima nameplate appeared in the North American market since 1993 and has gone through five generations. The Altima Coupe didn’t appear until the introduction of the 4th generation Altima Sedan in 2008.

Immediately upon the introduction, the Altima Coupe in addition to the standard 2.5S trim, a 3.5L 270 hp V6 (VQ35DE) was available as the 3.5SE. Facelift was done on both the Sedan and Coupe in 2010 on exterior cosmetics, and minor interior equipment upgrades. The Vehicle Dynamic Control was included in all models as standard equipment to comply with Federal Motor Vehicle Safety Standard (FMVSS) No.126 that mandated electronic stability control (ESC) systems by September 1, 2011. Two trim levels (2.5S & 3.5SR) were available.

Our tester is the, end of the era, 2013MY 2.5S in Brilliant Silver with Charcoal cloth interior. It was assembled by Nissan North America Manufacturing in Smyrna, Tennessee with $26,200 MSRP including $790 destination fee, and the optional 5-piece floor and trunk mats valued at $180. 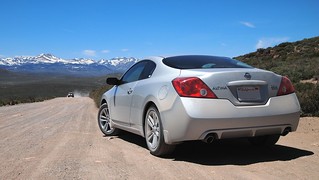 Impression – Coupe and Sedan are very much Alike.

Back in our teenage years, rolling in an Accord Coupe was thought to be cooler than those rolling in their mom’s Accord Sedan. Thinking back and looking at the specifications between the teenager coupe and mommy sedan with a much educated mind, we are not sure why we once had that thought. Every performance figures were closely the same.

Is being cooler the attraction for people to shop for a sedan based coupe?

Solve this once for all, we took possession an Altima Coupe, put it through a 800 miles test route from San Francisco to Mammoth Lakes in the Eastern Sierra via SR108 passing through the oxygen depleting 9,624 feet Sonora Pass summit, we evaluate subjectively how the driving dynamics are different than the 4-door version that we are familiar with. 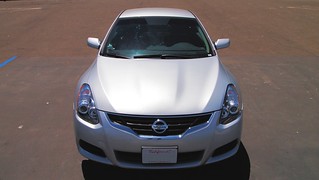 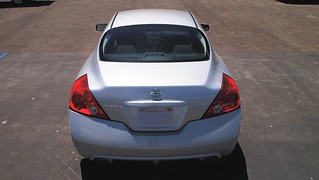 Looking at the front ¾ view, the Altima Coupe appears like the Altima Sedan in front of a concave mirror. Its shortened length is like the deformed scale Choro-Q toy car. The cute-shape is from the 9.8-inch reduction in overall length (now at 180.9-inch) mostly from the rearend. Its styling appears taken straight out of the backend of the 2006 Infiniti G35 Coupe. The marketer will say, “carrying the family trait.” The styling took us some time to get used to. It is just ain’t that cool. 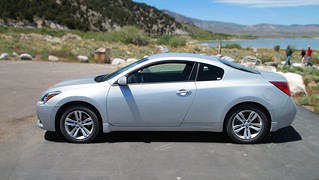 Situate into the cockpit, the front seats are noticeably lower than the Sedan to accommodate the lowered roof height. Headroom is still plenty sufficient for a 5’10” tall driver. The lower seat height do make us feel closer to the road, and makes the dashboard and the beltline higher enclosing us for that sporty feel. Combined with the tilt-and-telescopic steering wheel, ideal driving position is easy to find.

The seats are covers by two different fabrics where the Alcantara-like fabric is used on the side bolsters to enhance lateral support for navigating curvy roads. The longer than expected seat bottom provides good thigh support to evenly distribute the body weight over a larger area for the long journey without getting a sore pressure point on our bottom.

Glancing at the instrument panel the entire dashboard and the audio system are identical to the Sedan. Emergency brake, professionally known as the hand brake, is properly located by the shifter. Otherwise, there is no drastic feature that makes us think we are in a Coupe until we look pass the B-pillar. 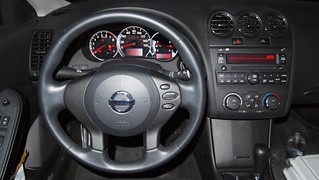 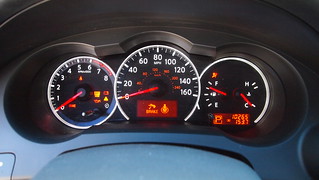 Nissan claims that the Coupe has seating capacity of five. In reality, it can barely fit about four, and two of them will need to have detachable legs – rear legroom is just simply lacking. Short torso is also a prerequisite for the rear seat. Anyone taller than 5’6”, the back of their heads will consistently rub against the rear windshield.

This crowdedness is reflected by the loss of 11.4 cu-ft (at 89.3 cu-ft) of passenger compartment space. The trunk in the Coupe has shrunk by half (at 8.2 cu-ft). With careful packing, it is barely big enough to haul two person’s belongings for a weekend getaway. Definitely the Coupe is not a car for family grocery shopping. Hauling is not the exact purpose of this vehicle.

So it can’t haul, it can’t fit people with intact lower extremities. It is a fact that coupe are less practical than a sedan. Maybe it is a sporty version of the Sedan? Let’s find out.

Handling & Ride Characteristics – Not Sporty Enough to be Sporty 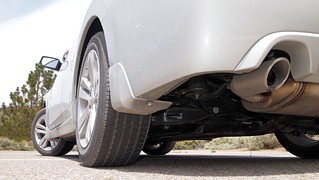 In pure physics, the lower vehicle height-to-width ratio the lower the center of gravity. That is also the essence to improve handling. Lower vehicle also have a better balance of damping for ride, pitch and roll while taller vehicle feel tippy, and underdamped. Wide vehicle tend to have more grip, and roll less while narrower tend to have the complete opposite.

The Coupe’s 2.1-inch (55.9-inch) lower overall height, and identical width (70.7-inch) give the Coupe 0.8 height-to-width ratio. However, that is also the same figure as the 2013 Kia Optima midsize sedan. So we can’t say the Altima Coupe is any better in this regard.

The Coupe’s 105.3-inch wheelbase, although shortened by 4-inch, is nowhere close to sporty car stubby. Most manufacturers agree that 100-inch wheelbase is the sweet spot for any sporty car chassis.

With the same underpinning as the D-platform; MacPherson front, multi-link rear, identical size sway bars as the Sedan. Compare to the longer and taller Sedan, the Coupe does naturally becomes more sporty. Going into the corner, the Coupe is apparently more agile with more in sync movement between the front and rear.

In the street, the Coupe isn’t a bad car to drive. It has some sportiness, and some softness. If you like the Sedan’s ride and handling then you will also appreciate the Coupe’s. 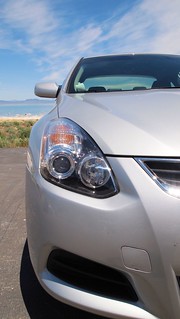 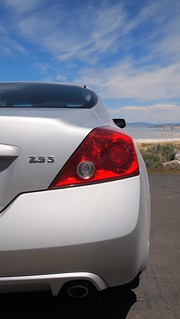 Driving through the gorgeous and fun Sonora Pass where its magnificence resembles The Alps in Europe. With the exhilarating 45-mph speed limit, it’s a driving heaven. To illustrate the fun, with our polished high performance track driving experience, we are barely able to reach the speed limit in our somewhat sporty Coupe with its tires squealing in warning. Most travelers, either too focused on the gorgeousness or getting high altitude sickness are going at half speed.

Can the Altima Coupe go any faster? Sure. But it could be a bit dicey.

Pushing the Coupe toward the performance car envelop unveils that the suspensions are underdamped for comfort. It creates too much wheel motion making the chassis feel unsettled. Going hard into a tight corner, severe body roll and heavy understeering are experienced.

The threshold of Nissan’s Vehicle Dynamic Control (VDC) is set slightly higher than the limits of the tires evident by the VDC’s participation just after the tires start to lose grip. The VDC involvement is fairly gentle, and works behind the scene most of the time.

Keep us from plunging into the abyss is a set of 215/55R17 Bridgestone Turanza EL400-02 all-season touring tires. The EL400 are popularly employed as the OE tires on day-to-day vehicles such as the 2009 Lexus ES350, and 2013 Toyota Yaris. It is also a tire that we encountered numerous times in our previous test drive reviews. The EL400 is the proper tire to match the purpose and intent of the Coupe. Quietness is good.

Just like the suspension components, the conventional hydraulic power-assisted steering is identical to the Sedan. On-Center feel is accurate, light in feel, and lack of sufficient weight gain when turning. Road feel is muddy for a Coupe, but of course it can’t be compare to a G35 Coupe.

Overall, the Coupe offers a bit sharper turn-in finesse than the already well-sorted commuter Sedan. Just remember the Altima is not born to be a performance car; suggested by it’s, same as Sedan, 0.81 lateral g-force performance figure. 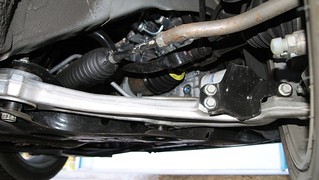 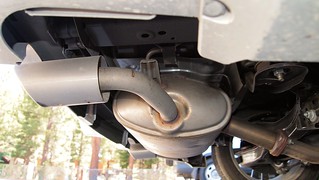