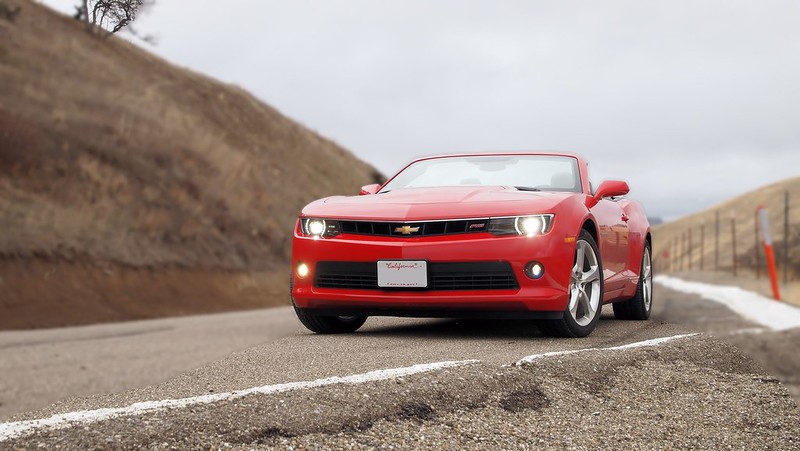 An object to attract full figured doll, plastic or not, what not to like.

America pop culture is as diverse as the national identity of its citizens. In this spectrum, there is the steroid fueled macho dudes flexing in the square circle. Likewise there is the half-naked plastic dolls with astronomic breasts, bubbly bottoms, and anorectic waistline wrapped in the pink paper boxes. The commonality connecting them are often the iconic American muscle cars; big powerful versions for the macho, and bright-colored convertibles for the sexy dolls. In reality, the pop culture do tend to follow this trend where men have to be big, and ladies have to have implants.

We don’t pretend to know anything about sociology. We, as car enthusiasts, only wanted to know how a modern muscle car fulfill dual identities: both the masculinity and maidenly all-in-one. The former have been examined in our previous test drive review of the 2011 Chevrolet Camaro SS where we described the SS being the macho man in the Camaro lineup, and like a professional wrestler that is recognized by the American pop culture. The latter one will be further discussed here. 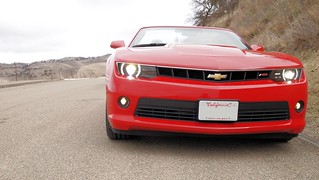 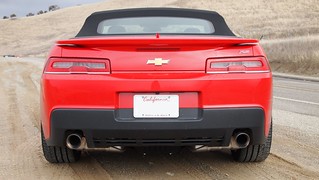 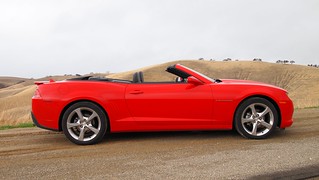 This Camaro Convertible was introduced to the market in early 2011, two years after the introduction of the 5th generation. The history of the Camaro goes back to 1967. More history can be found HERE.

LT & SS models were initially offered on the Convertible. The LT comes with a 3.6L V6 (LLT) engine that pumps out 312 hp & 278 lb-ft and mated to either a Hydra-Matic 6L50 six-speed automatic, or Aisin AY6 six-speed manual transmission. Two different 6.2L V8 engines are offered in the SS model dependent on the selection of transmission. The V8 engines are covered in our previous review HERE.

In 2012, the LLT engine was replaced by the LFX engine with the horsepower increased to 323 hp. Then in 2014 the Caramo lineup received an exterior facelift. It comes with a more aggressive front fascia and projector-style fog lamps. The original square tail-lamps are swap out to the sleeker rectangular units. This facelift  made the Camaro standout, more so, with the RS package. This package completely dress up the whole car, particularly the HID projector headlights with LED Halo rings, LED tail-lamps, and the 20” alloy rims.

Our Oshawa, Ontario, Canadian built tester is the convertible model in Red Hot color with the RS, and 2LT packages. It has $39,930 MSRP including destination fee, and  $1,650 for the RS package. 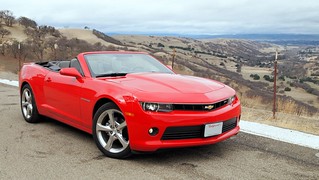 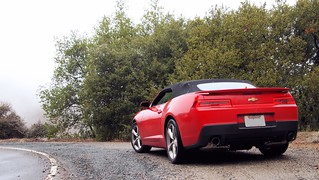 This is our 2nd long term encounter with a Camaro, and fully realized from our past experiences that the intend of the Camaro are not meant for generating performance figures like constantly short lap times or ultra high lateral g-forces at the track. The Camaro SS indeed generates respectable performance figures but it is a car prioritize in fun seeking, and coolness factors. Knowing that a convertible would never be as fast as a Coupe due to its inherited deficits in structural strength and higher curb weight. More so our tester is equipped with a smaller engine than the SS. To be fair this review is not meant to be a V6 vs. V8 Camaro shootout.

This review however is to see if our 2014 Camaro Convertible RS with the 2LT package would fulfill the needs for those inspired by the plastic doll’s imaginary lifestyle.

Our weekend long test period covered close to 500 miles. We took our Red Hot from San Francisco Bay Area to the romantic Monterey Peninsular, and also through our normal test route from Livermore to San Jose via the twisty Mines Road which we consider it as the Nürburgring of the Greater SF Bay Area. 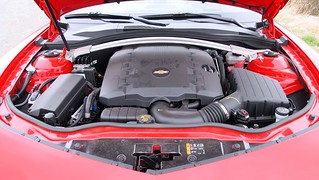 The 3.6L V6 [engine code: LFX] powerplant under the mile long hood is the latest iteration of General Motors’ High Feature engine. The LFX has cast aluminum cylinder heads have 24-valves actuated by DOHC with VVT that independently varies cam phasing on both intake and exhaust cams. The exhaust manifold is integrated with the cylinder head to reduce weight and quicker light off of the catalytic converter to reduce emission. The sand cast aluminum block with 60-degree cylinder bank angle has 94 x 85.6 mm oversquare bore and stroke layout. Piston cooling jets, structural front cover and oil pan keeps durability and NHV (noise, harshness and vibration) in check. Direct injection is employed to allow 11.5:1 compression ratio on regular unleaded petrol. The LFX weighs about 350 lbs.

The LFX in the Camaro tune pumps out 323 hp @ 6,800 rpm and 278 lb-ft @ 4,800 rpm with 7,200 rpm redline. The dyno chart indicated that at least 80% of the peak torque is available at 1,500 rpm. The torque curve basically plateaus from 2,500 to 6,000 rpm. This electric motor like broad spread of torque makes the engine feel more flexible. Flexible indeed for GM to fit this engine in Chevrolet Caprice PPV, Chevrolet Equinox, Cadillac ATS, and Chevrolet Impala; that’s from fleets to SUVs, and from performance vehicles to full-size granny sedans all-in-one.

Efficiency is therefore high since torque is instantaneous at any given rpm but like electric motors the LFX is absent in character. On the road, the 4,078 lbs curb weight demands for better acceleration power. Low end torque is a little shy. We can’t say the LFX like to be revved either since there are not incentive in sudden surge of power or throatier notes as rev is building up. The engine responds with the same refinement in smoothness, courteous and mellow engine and exhaust notes regardless of rpm.

There is nothing muscle car about the engine or spectacular about its design and technologies in the sea of V6 engines out there. Like most V6 engines, the engine can sound like a vacuum machine. The LFX just doesn’t standout. C’mon, the Camaro is not your typical family sedan. 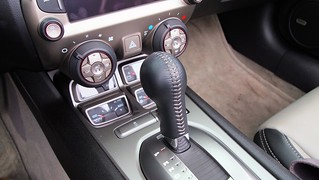 Mated to the back-end of the engine is GM’s 6-speed automatic transmission [Transmission code: Hydra-Matic 6L50] with TAPShift Control manual mode. The 6L-50 has been around since 2007 designed and produced by GM. It is commonly found paired with V6 engines, and will be in a 2015 Chevrolet Colorado pickup truck. Like the LFX, the 6L50 has the diverse portfolio in mind and LFX’s flat torque curve makes the adaptation easier.

Similar to the 6L80 in the SS we tested, the 6L50 does not mind slamming in and out of gears in attempt to shorten shift time. At times, the shifting do get a bit busy since it has the tendency to get into the 6th gear any given chance. In automatic mode, it is willing to downshift. The smaller inertia of the 6 cylinder compare to SS’s big bore V8, the downshifts do feel smoother. Shifting is not particularly quick for performance car standard, more in tune with a sporty family sedan shifting speed. The manual mode honors the driver’s gear selection and will not up or down shift on its own.

Mesh the intuitive and linear throttle pedal down, this powertrain is capable of taking the Camaro from
0-60 mph in about 6.3 sec, and reach quarter-mile in 14.8s at 95 mph – a V6 family sedan like performance should be easy for the impersonators to manage. 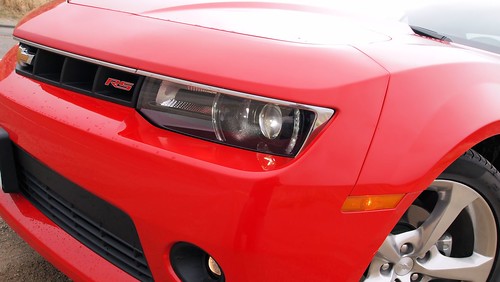 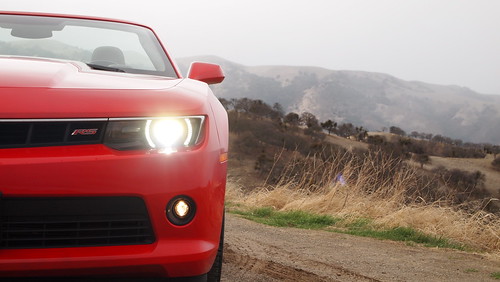