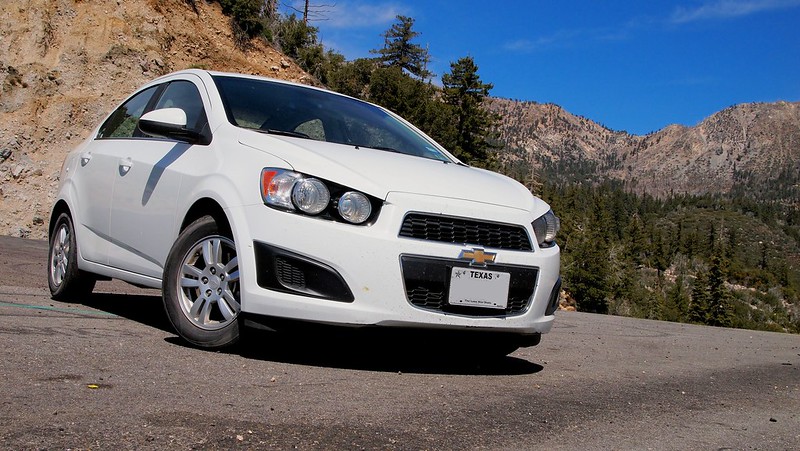 The Sonic is a substantially non-subsiding subcompact

The mentality of the traditionalists is that subcompacts are the subsiding of small cars. They are the econoboxes that are stripped down to bare-boned which lacks creature comforts, and dull to drive. They are insubstantial as a result of their lesser stature both in size and socially. When the subcompact name is pronounced, say, fIt, the lack of syllables cause it to not produce the same dominating sound wave as, say, ca-mmm-rer-ee, or suh-bur-buh. 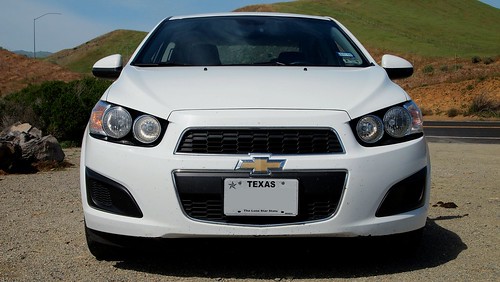 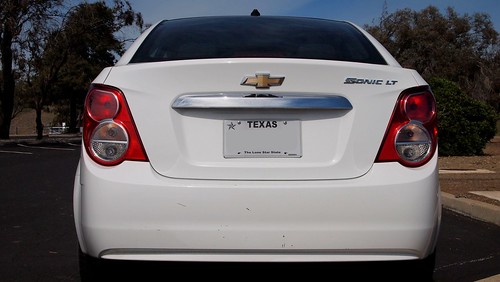 The Chevrolet Sonic is General Motors’ latest attempt in changing that traditionalists’ common belief on subcompacts that was once fueled by its lackluster Chevrolet Aveo. The Sonic (chassis code: T300) was introduced in 2011 as a 2012 model as a subcompact to replace the Aveo and participates in a segment that has been predominately captured by imports. 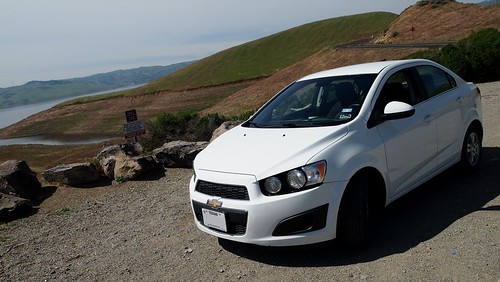 The development of the Sonic was a global effort where the project was led by GM Korea, styled by Holden in Australia, platform was updated by Holden while the suspension was tuned done by Corvette Racing engineers in the U.S.. The North American Sonic is produced in the Orion Assembly plant in Lake Orion, Michigan alongside with the Buick Verano compact sedan. Sonic is the only U.S. assembled subcompact in the segment.

Two body styles were offered; sedan, and 5-door hatchback. The sedan version competes in the same segment as the Ford Fiesta, Hyundai Accent, Kia Rio, and Nissan Versa sedans. In 2013, three trims are available in the sedan: LS (base), LT, and LTZ. The base powertrain is a 1.8L inline-four mated to a 5-speed manual or 6-speed automatic transmission. A1.4L turbocharged inline-four generates 138 hp and 148 lb-ft of torque has both 6-speed MT or AT is optional on LT, and standard on LTZ.

The model that would attract car enthusiasts is the 5-door RS that include the 1.4L turbocharged engine, 4-wheel discs brakes, lowered sports suspension, close ratio 6-speed MT with shorter gearing, and unique exterior and interior bits.

Our tester in Summit White is the midrange LT model with the base powertrain. It has $17,750 MSRP including the $825 destination freight charge. 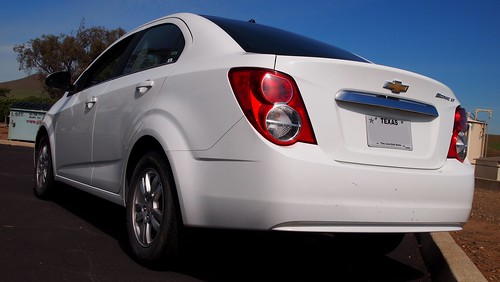 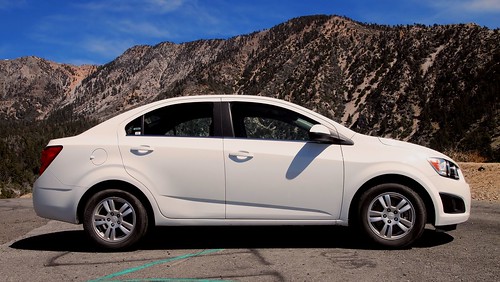 Impression (LZG Recommendation Factor: 4/5) – A class above and beyond the subcompact segment

GM, or Chevrolet for this particular case, has been known for its inability to produce a decent compact car. In the recent history, Cavalier, Cobalt, Metro, Prizm, and Spectrum never caught on even the latter three were built by someone else, Suzuki, Toyota, and Isuzu, respectively. Most of those ended up in rental lots, or commercial fleets. 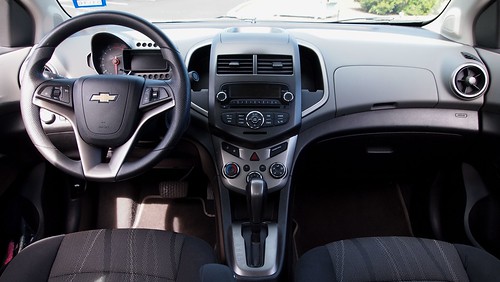 It is a known fact that it is harder to build a decent smaller car than a very good big car. Reasons are plentiful. Smaller cars present packaging challenges for both mechanical components and roominess in passenger compartment, there are constraints in limited development and manufacturing budget, and American manufacturers did not typically have the components and assembly plants to efficiently build one.

A lot of them turn to their Asian or European team for the solution. The results are seen from the recently thriving sales of the American brand European rooted compact cars such as the Chevrolet Cruze, and Ford Focus. Subcompacts are starting to catch on particularly in the increaseingly congested urban areas of the States.

To evaluate how the Chevrolet Sonic manages this congestion, our 950 miles test journey takes us from San Francisco Bay Area to Los Angeles. Including a blast in the canyons in San Gabriel National Monument near Angeles National Forest in Southern California to see if the Sonic in the natural America landscape is as good as in the urban setting.

Here is the spoiler: the Sonic is surprisingly good. The driving feel is a class above than its subcompact segment suggested. 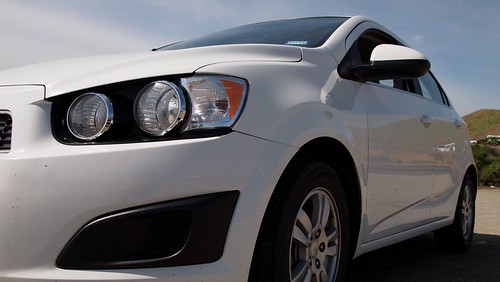 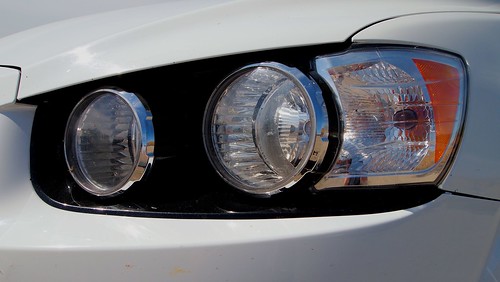 Features and Technologies (Score: 3/5) – Not striped down. Plenty of Room.

A quick walkaround, the focal point of the front fascia is a pair of masculine hood lines growing at each side of the contemporary Chevrolet signature grille then dropping sharply to the fenders to meet those exposed motorcycle-inspired headlamps. This styling alone brings unique character and immediately set a tone for the Sonic.

On the side profile, the definite ridgeline handsomely connecting the front wheel arch to the top of the tail-lamp while a solid concave line going at an acute incline angle from the bottom of the front door running up toward to rear wheel arch giving the it a sense of movement. We would say the styling is almost sporty and attractive except the rear fascia is a bit bland and under styled.

The motorcycle inspiration continues as soon as we situate in the cockpit. The asymmetrical instrument cluster immediately becomes another focal point. A large round analog tachometer with a red dial on the left, and to the right is a high definition LCD digital display showing vehicle speed, and other useful information. The light blue illumination is even more attractive at night. 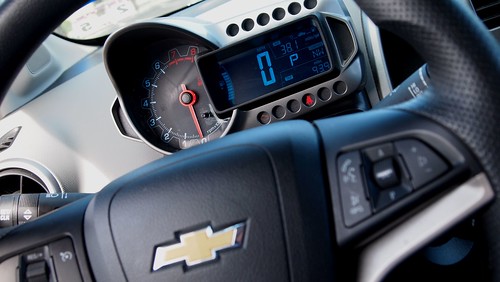 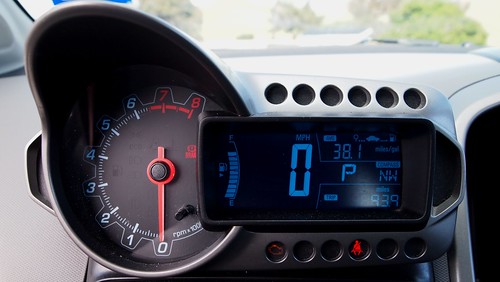 The front seats have excellent thigh support. We didn’t get the usual sore bottom after 4 hours of non-stop driving. Side bolsters are sufficient for spirited driving through the canyons. Ideal driving position is offered by the tilt-and-telescopic steering wheel, and the 6-way manual adjustable driver seat with fold-away armrest. The Sonic just eats up the miles with ease.

Ergonomics are generally good. To be nitpicky the audio system controls take some time to get used to, and the rearview mirror creates distortion that makes the object unrecognizable, a Nissan Altima looks like a Murano from the curved surface for broader spectrum of view.

The LT package includes all the basics one will ever need for a modern vehicle no-more-no-less: power windows and locks, air conditioning, 60/40 split-folding rear seats, cruise control, and a decent in sound 6-speaker audio system with Bluetooth, and USB/auxiliary input jacks in the upper glove compartment. 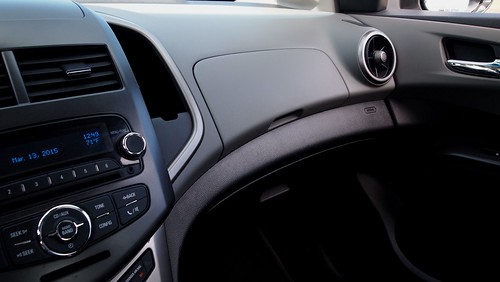 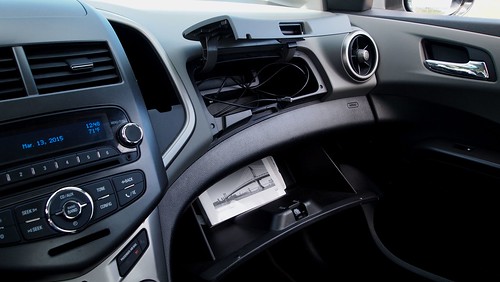 Occupants of the Sonic are surrounded by 10 standard airbags, and it also received the best overall front and side crash test results, and 4 out of 5 on rollover from National Highway Traffic Safety Administration.

There is 90.3 cu-ft of passenger compartment volume squeezed in between the Sonic’s 99.4” wheelbase. The 68.3” overall width and 59.7” overall height is providing comfortable seating for 4 adults. A 14.9 cu-ft trunk is also amply sized.

However, we are displeased with the manufactures making subcompacts so tall. We noticed they generally make the bottom of the seat higher to reduce the need for legroom to keep the wheelbase petite. Perhaps, also expanding upward at least on paper the compartment volume will seem better even though the space above the head has no practical use. In our opinion, subcompacts are supposedly snug. The Sonic’s overall height is 2” taller than a typical midsize sedan. With a 5’10” driver, there are 6” of wasted headroom. This unnecessary tallness hampers handling, and creates a higher coefficient of drag at 0.33. 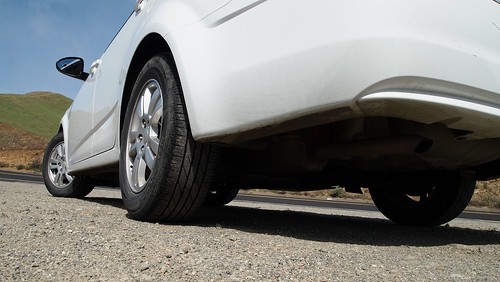 Its multipurpose attribute requires the platform to support curb weights up to 3,400 lbs is the reason why the Sonic (curb weight at 2,745 lbs) is almost 200 lbs heavier than its heaviest competitor the Hyundai Accent, or over 300 lbs fatter than the featherlight Nissan Versa.

GM claims the body-in-white measures 28 Hz in first-bending and torsional performance. A figure that is twice as stiff as the Aveo, and among the stiffest in the segment. To put that in perspective, the 2002 to 2008 BMW 7 Series (E65) full-size luxury sedan has identical figure. This means that the stiff platform structure is unaffected by bumpy road surfaces or vibrations caused by the powertrain. Thus allows the suspensions focus on its function to absorb pavement irregularities and keep the tires on the ground.

Performing this task is the conventional subcompact recipe; MacPherson struts with offset coil springs and anti-roll bar in the front end, and semi-independent torsion beam axle with coil springs in the rear. Contact patch is generated by a set of 195/65R15 Hankook Optimo H428 grand touring all-season tires with A ratings on both traction and temperature.

Testing the Sonic’s handling at the tight hairpins on SR 39 and the windy high speed SR198 revealed the sporting natural of the suspension tuning from its willingness to turn, and the minimal amount of understeer under spirited driving.

Pushing harder, there is a tad of disconnected feel between when the tires bite down into the corner and the body’s leaning motion. The track width to height ratio is greater than 1, hinting the car is taller than its width which gives the sense that the center of gravity is higher than the hip of the driver, and the suspensions aren’t stiff enough to compensate. 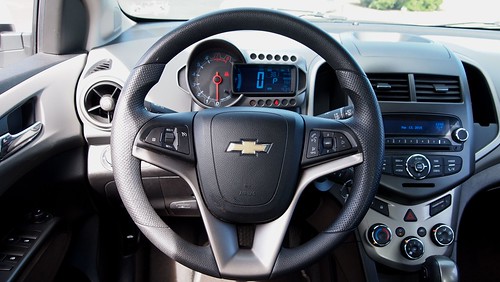 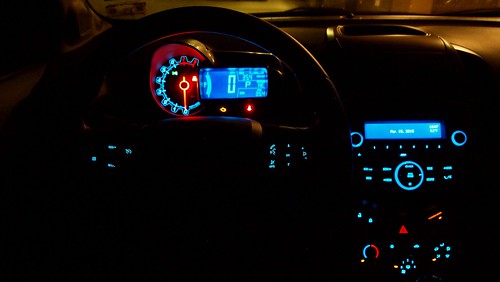 This reversed pendulum effect combine with the nature of torsion beam axle and the lack of rear anti-roll bar, mid-corner bumps do tend to cause the body to sway, sending the car to a different orbit. The rearend also has heavier leaning angle than the front.

Trackability is impaired by these inherited deficiencies for the purpose of this vehicle. We can only imagine how the optional sunroof will exaggerate the problem. However, not too many driver in this segment will corner the car as hard as we do. On paper, the Sonic generates lower than expected 0.80 lateral g-force. 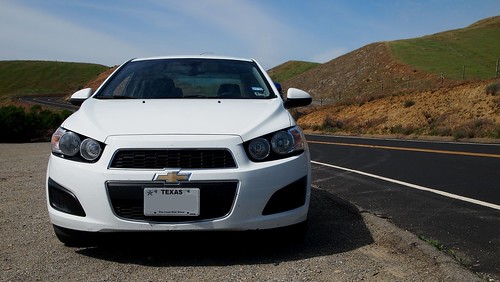 The Hankooks provide decent dry traction, cornering stability, and steering response. Ride is communicative. The Sonic is capable of soaking up the miles on I-5 with ease. It has just the right amount of feedback to let you know the condition of the pavement. The suspension absorbs imperfections extremely well. Some infrequent harshness is experienced due to its short wheelbase.

Other than the visual resemblance of a motorcycle, the steering is almost as direct, well, relatively speaking. Its 14:1 steering ratio is the best between being too quick and too dull. The steering is almost perfect for the Sonic’s design intent. A tad less boost on the column-mounted electric power steering, and a tad more weight gain would properly dress it up.

The steering input also has better than expected accuracy. Feedback through the wheel is a tad muddy due to the high profile tires but contains acceptable amount of information. No torque steer was felt. This steering should be the industry standard.

The StabiliTrak stability control has properly tuned threshold. In default, when a slight tire squeal is provoked, the ESC light blinks in the instrumental cluster as the only indication of its operation. With the system defeated, the Sonic is fun to toss around. In the heat of cornering fun, we were expecting the red dial in the tachometer would rise at a faster pace where redline would start at some higher digits.