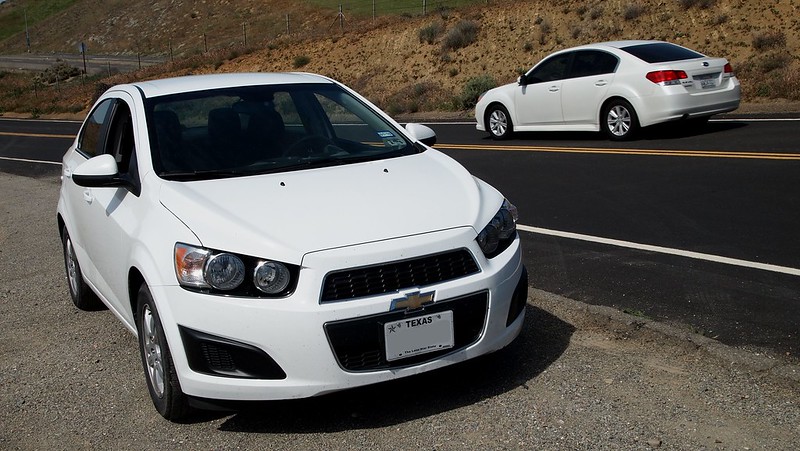 Regrettably, the powertrain is a tad too ordinary to support the fun-seeking handling but our familiarity to the conventional powertrain makes it grow on us. 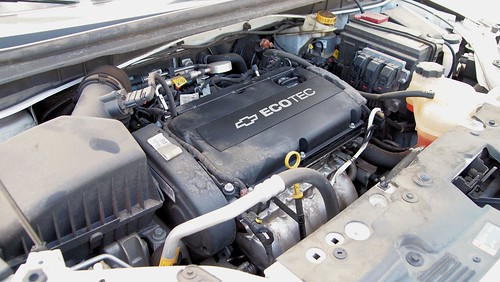 The LUW engine is a tad behind the game as suggested by its cast iron engine block, conventional sequential fuel injection, and the traditional front mounting exhaust manifold all supported its ordinary output for its displacement. However, the Sonic has the largest displacement base engine in this segment while its competitors are equipped with 1.6L. This Toluca, Mexico made LUW engine is transversely mounted, driving the front wheels via GM’s Hydra-Matic 6T30 6-speed automatic transmission with manual-shift mode.

The manual mode is cumbersome to use. It takes too many maneuvers to operate. The manual shift control is a toggle switch on the side of the shift knob. The manual mode is activated by lowering the shifter from “D” to “M”. This maneuver alone will not signal the transmission to downshift like most common practice. Placing to “M” will only locks the same gear as when was at “D”. To downshift, the toggle switch will need to be press down by thumb with assuring firmness. We left it in “D” majority of the time and found its quicker to jab the throttle for the downshift. It is willing to downshift but the overall shifting response is a tad slower than our liking regardless.

The brutal, the tailgating, divebombing, where every inch of space are defended Los Angeles traffic is the perfect testing ground to check out the responsiveness of this conventional powertrain, and the tardiness in tranny response requires a bit more advance planning for the counterattack in lane changing and passing. 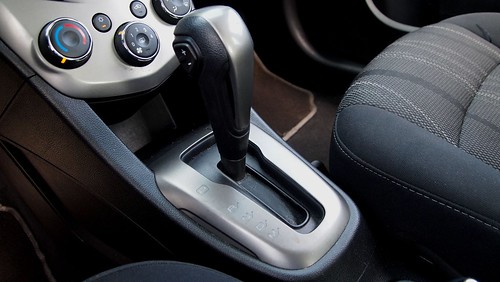 The tranny also has the tendency to get to higher gear in a rush. Some gear hunting was experienced particularly between gears with wider ratios. Subtle and characteristic shock can be felt at gear changes, and you can manipulate the gear changes with your right foot intuitively. We prefer feeling the subtle shock and knowing the machine is trying to be efficient whether than inefficiently smooth. No downshift rev match is programed just like the rest of the segment.

In the prolonged decline, auto downshifts to promote engine braking was not observed. Similar to Sonic’s bigger brother, Cruze, when the brakes are applied to slow down the car, the transmission downshifts gear by gear which means it is always in proper gear at any given time in case you need to get back on the gas and it will instantaneously put power to the ground. The more ordinary transmission would remain in the high gear. Any sudden need for acceleration will require dropping a couple gears which affects the instantaneous of the throttle input. This transmission tuning eliminates this embarrassing moment.

The heavier curb weight has an appetite for a bigger motor. We found the engine is a tad underpowered. Thus required frequent visit to the engine’s buzzy 6,500 rpm redline. Under high RPM, the engine note transmitted to the cabin is a tad coarse. Vibration is felt through the steering wheel and at the gas pedal; not too bad when consider that to resemble how riding a motorcycle is like.

With 90% of peak torque is available from 2,400 to 6,500 rpm making the engine torque curve as flat as pancake, and the horsepower curve as linear as an electric drill. At 70 mph, the engine revs at about 2,500 rpm in top gear utilizing the earliest meaty part of the torque band. 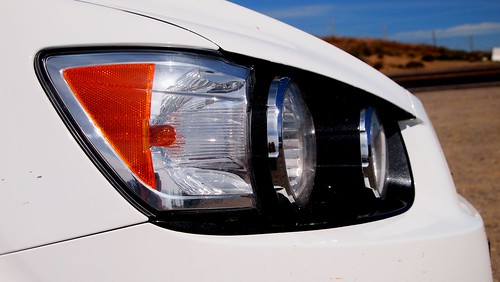 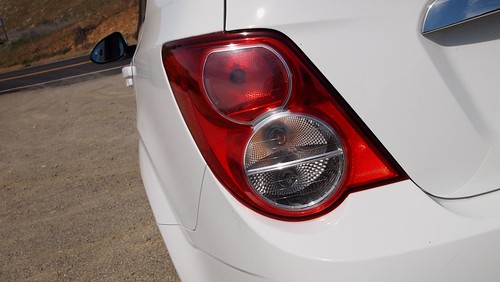 This powertrain is capable of propelling the Sonic’s compact car like curb weight from 0 to 60 mph in low 9s, and ¼ mile in low 17s. Quite slow numbers. Don’t be complaining though since this same powerplant also powers the base model Chevrolet Cruze that weighs 350 lbs more.

The EPA rated fuel consumption of 25 city, 35 highway, and 28 combined mpg is reputable in reality where our trip averaged 34.83 mpg with the worst at 32.37 mpg and bested at 36.87 mpg. The average fuel consumption read out on the dash reported average of 1.8% better fuel consumption than actual. We believe as long as the error is within 5% is consider accurate. 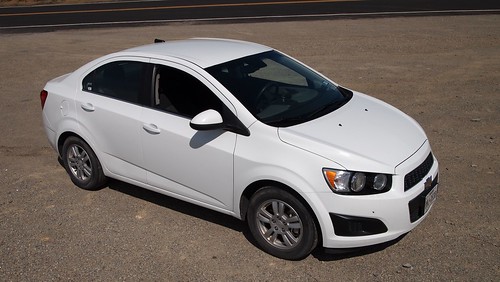 The stopping power comes from 10.8” x 1.0” vented disc at the front, 9” drum in the rear, and comes standard with 4-channel Anti-lock Braking System (ABS) with Electronic Brake force Distribution (EBD) and Brake Assist.

The first 25% of pedal travel is spongy. It has not much effect on braking. Feel like old brake fluid. The tester do have more than anticipated digits on the odometer. Once beyond the sponginess, the pedal is easy to modulate and weighted properly.

Under emergency braking, ABS involvement is smooth. Brake force proportioning does a good job in preventing the rear drums from locking up prematurely. The amount of nose dive is within expectation. Stopping distance is shorter than expected. On paper, the brakes are capable of stopping the car from 70 mph in 185 ft. The brakes are sufficient to endure the 5,600 ft descent from Crystal Lake at SR39 back to sea level. No fade was experienced. 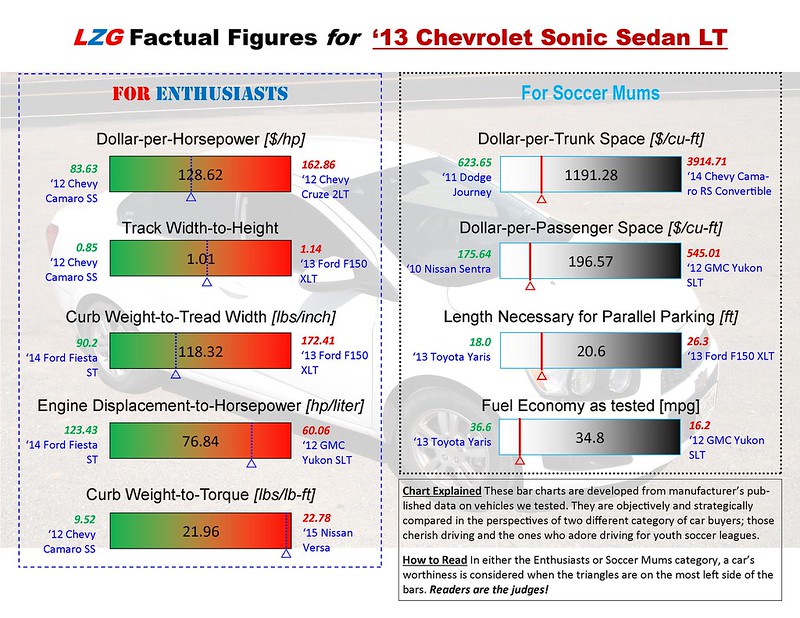 Afterthought – The Sonic is remarkable

Like the Chevrolet Cruze, the Sonic does indeed both subjectively and objectively perform like a car that’s larger than its class. And because it feels more substantial we are somewhat holding it to higher standards – expecting a tad more handling, a tad more power, a tad this and that…

For a subcompact, a supposedly the most basic form of transportation, being this nice to drive and with such a unique character is remarkable. Sonic’s MSRP is not exactly the cheapest but you sure do get what you are paying for. The key is to keep an eye out for GM’s incentives.

In the September, 2011 issue of Car & Driver magazine, they placed the Sonic LTZ 5-door hatchback in a comparison test against Honda Fit, Hyundai Accent SE, Kia Rio SX, Nissan Versa SL, and Toyota Yaris SE. The Sonic placed second out of all the import brands that have been building reputable small cars for decades. Thus reaffirming the validity of our review that Sonic is worth a good look, particularly the 5-door hatchback model with the 1.4L turbo engine. LZG 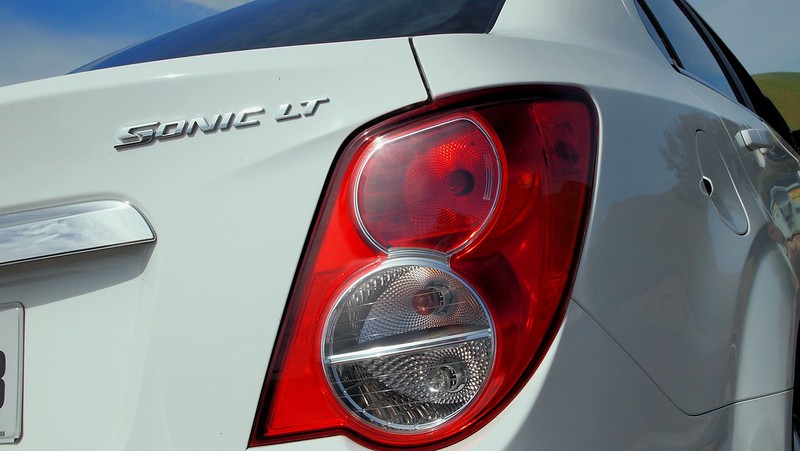