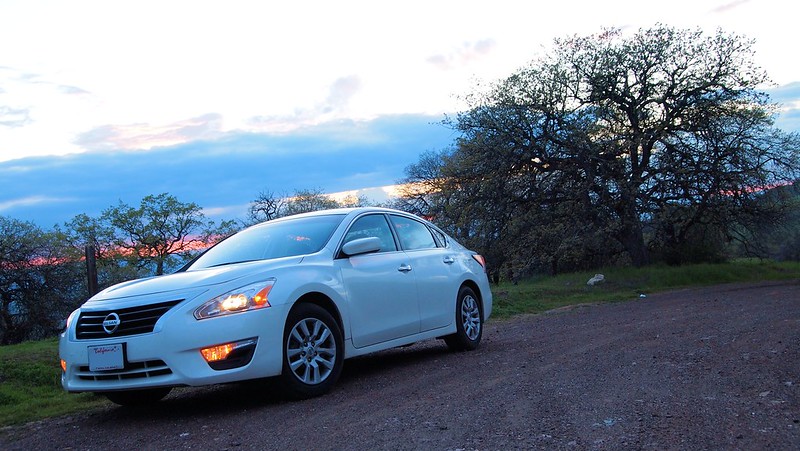 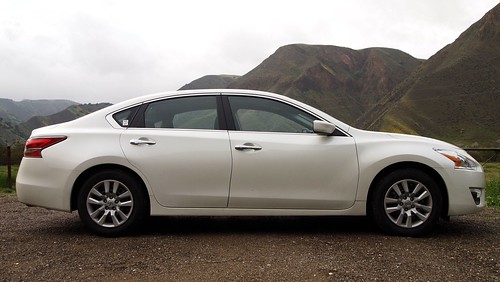 Today’s automotive business is focusing on gaining market volume by increase the number of sales and profit margin. To do that often times brand image and heritage are disposable. Accountants are now leading car design and engineering, the unit of measurement of quality is in dimes-and-nickels saved per car. This is done by prolonging the use of existing mechanical components, sharing of platform and powertrains, and tuning for consumers that know nothing about the technicality, and being completely ignorant on the emotion-attachment aspects of the automotive culture. This Nissan Altima is put together under this new philosophy of car building. 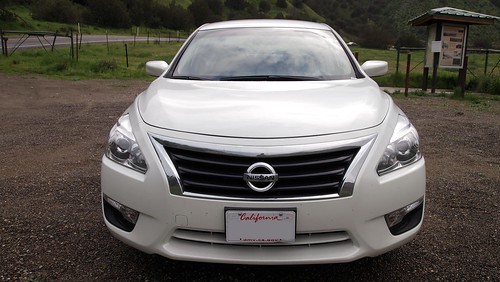 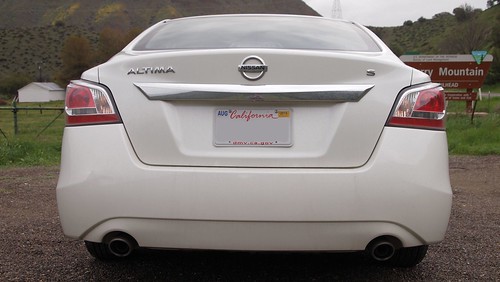 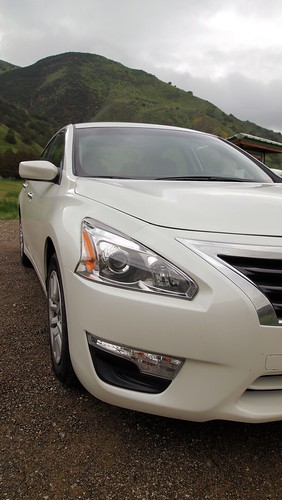 This completely redesigned fifth generation Altima (chassis code L33) was debuted in the 2012 New York Autoshow and released to the market in June 2012 as the 2013 model. Nissan called it, “Challenging the Theory of Mid-Size Sedan Evolution with Innovative Technology”.

The bulk of the mechanical components in the L33 are carryover from the previous generation (L32) including the “D” platform. In that sense, the L33 is riding on the same wheelbase as the L32 (109.3”). Both overall length and width have been increased by 0.8” (191.5”) and 1.3” (72”), respectively. Overall height is marginally lowered by 0.1” (57.9”). This new package provides an increase in passenger compartment and trunk volumes by 1.2 (101.9) and 0.1 (15.4) cu-ft, respectively. Twists were made to the continuously variable transmission (CVT) transmission, and rear suspension. 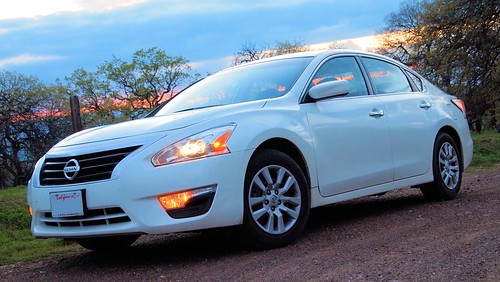 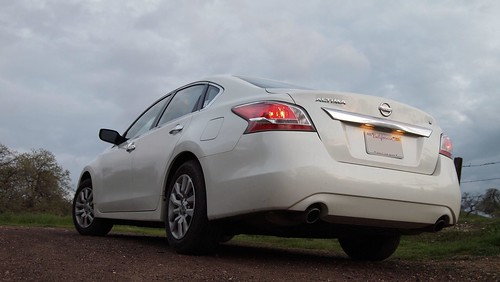 We were big Nissan fans before the turn of the millennium. We live and breathe all things Nissan, and particularly familiar with the Altima. We had broad and lengthy personal relationships with the U13 (1st Gen. 1993 – 1997), and L30 (2nd Gen. 1998 – 2002) models. Also drove quite a few L31 (3rd Gen. 2003 – 2007), 2012 Nissan Altima 2.5S, and the one-and-only 2013 Nissan Altima Coupe 2.5S as well. We are definitely no stranger to Altima. We found the past Altima had more sophisticated design and offered better bang for the buck in terms of standard features and performance than its competitors.

Our previous test drive review on the L32 in 2012, we summarized it being, “The ultimate commuter, road tripper yet economical, practical, fun to drive, and is a Nissan.” The L32 still exhibited certain traces of Nissan’s typical greatness even though the accountants had worked themselves into the engineer’s office.

In this 1,000 miles test drive endeavor from San Francisco Bay Area to Newport Beach in Southern California via the terrains that are meant for American mid-size sedans, we will expose how the accountants’ handiwork botch the once decent car. 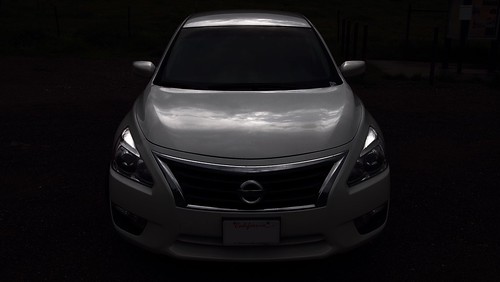 The styling cue of L33 seems to be derived from the Infiniti G Sedans. From its wide and aggressive front end styling, how its distinctive projector-type headlights blend with the crisp bumper and grille fascia, to its low rake A-pillar and fastback C-pillar streamline silhouette. This slick 0.29 coefficient of drag profile contains a strong resemblance of the handsomely sporty G37 sedan except that the L33’s excessive front overhang sticks out like a sore thumb; a common flaw of a front-wheel-drive car.

Situated into the spacious cockpit, Nissan took its already attractive Fine Vision Illumination instrument cluster a step further to enhance elegance and legibility. The center LCD display has high definition, and fast response rate. The instantaneous MPG readout bar has such fast response rate that we cannot practicality read the information; the bar will go left and right in 5 mpg increments in microseconds with a steady right foot on the gas pedal. 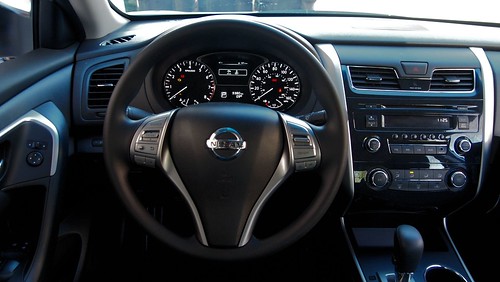 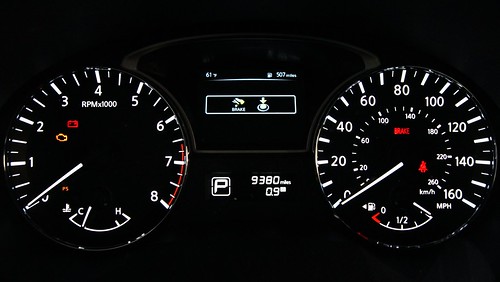 The entire dashboard looks like it came straight out from an Infiniti product that cost twice as much. Overlooking the hood, seeing the top of the bulging hood lines at the fenders, we almost thought we are in a G37, and getting excitingly anxious to press that engine-start button to hear that famous exhaust bark. 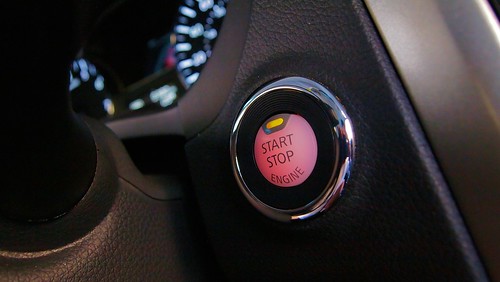 As soon the engine-start button is pushed our excitement is diminished. The button is very plastic and unsubstantial to the touch, follow by a second or so of delay before the starter would engage and crank the engine alive. The shutoff produces the same result. Engine will continue to idle couple more seconds after the button is pressed and released.

The operation of the switchgear unveils the same story in particularly the HVAC fan speed control does this in more of a fashion – like one with neurological developmental disorders to try to follow a simple command. It takes a total of 30 seconds for the fan to get from lowest to maximum speed. Not only this delay confuses the driver but critically it creates safety hazard, for instance, when there’s a sudden need to defog the windscreen in the inclement weather. These tardiness are just unacceptable. How would this happen to a car produced by a company that we used to worship?

The Zero Gravity front seat cushion does seem nice at first like your first night on those therapeutic memory foam mattress switching from conventional spring mattress. However, due to lack of side supports on the flat bottom cushion. Our bottom got numb after 4 hours into the 6 hours journey. While the Recaro deeply bolstered bucket seats in our ’14 Ford Fiesta ST show no butt numbness after 5 hours of driving, nor in the ’13 Chevrolet Sonic – these are subcompacts. 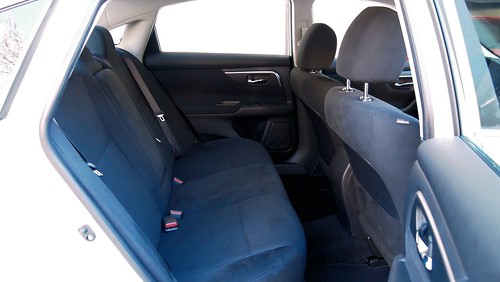 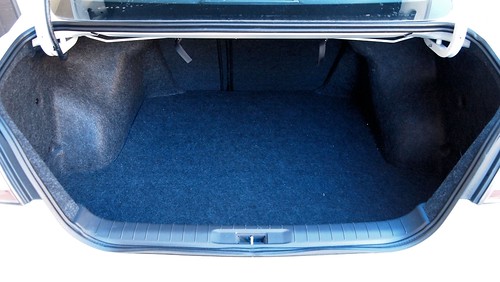 The segment standard 6-way manual driver seat and tilt-and-telescoping steering column make finding ideal driving position easy. What’s also segment standard is the ample passenger compartment and trunk spaces. Why would a car need to be this big? It’s a handful to parallel park due to its length. The girth and bulging hood make the lane feel narrower. On the plus side, the standard 6-speaker sound system offers decent sound. The projector-type headlights are excellent in nighttime. Wind and road noise intrusion are minimal.

All-in-all, the interior has all the basics for this segment nothing more, nothing less, and nothing really standout from its competitors. The accountant way of car design is announced as soon as we started the engine. 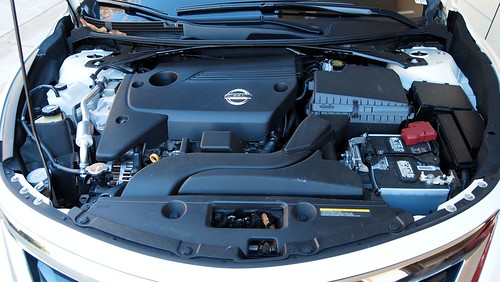 The coarse yet familiar noise transmitted into the cabin is Nissan’s QR25DE engine that has been in use since 2002 in the L31. This 2.5L DOHC 16-valve inline-four engine had overcame several mechanical issues early on, and received some noticeable updates in 2007 with the introduction of the L32. Minor improvements were made since then; the continuously variable valve timing control system (CVTCS) are now on both intake and exhaust cams, variable path intake manifold, and smart-charging alternator are employed here in the L33. However, the firewall facing intake manifold and last decade’s conventional sequential multi-port electronic fuel injection are hinting at its vintage.

The Altima’s direct competitors are all running gasoline direct injection technology, and twin cam variable valve timing and lift on some. The notable example is ’15 Mazda 6’s SkyActiv engine that runs on 13:1 high compression ratio [CR], and generating 185 lb-ft of torque at 3,250 rpm from the same displacement, while the horsepower king ’15 Chevrolet Malibu’s base 2.5L engine with direct injection, intake valve lift control, and 11.1 CR pumps out 196 hp and 186 lb-ft of torque with segment exhilarating 7,000 rpm engine redline. 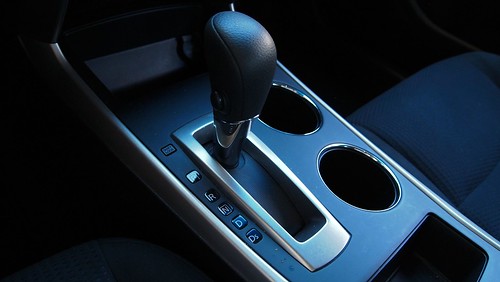 The QR is transversely mounted driving the front wheels via the Jatco supplied CVT. The once standard manual mode is no longer offered. CVT is also the only transmission available in the entire Altima lineup while the Mazda 6 leaves their customers options on 6-speed manual or automatic gear box.

Nissan calls this CVT the Next-Generation XTRONIC (Transmission Code: ARO). It was designed to improve smoothness and efficient by reducing its internal friction by 40% from the use of lower oil lever, low viscosity oil, and downsized oil pump, expanded ratio range (smaller shaft-diameter pulleys and a new belt design; ratio change raised from 6 to 7.3:1) for fuel economy and quicker acceleration off the line, and the use of Adaptive Shift Control (ASC) that learns the driver’s driving style on throttle input and steering angle that matches engine rev with vehicle speed for instantaneous responsiveness. The assembly itself is also 13% lighter, and 10% smaller in size. Nissan claims it to be 15% better in fuel efficiency. A figure that is verifiable in our test drive reviews.

In addition to improving the CVT technology, we also appreciate Nissan’s attention in weight reduction. With both increase in width and length, the L33’s curb weight is kept close to the smaller L32. At 3,191 lbs for a car in this size without much use of exotic metal is quite remarkable; considering a base model ‘15 Chevrolet Malibu weights 3,393 lbs.

On the road, the powertrain has ample of power and quick response for the typical day-to-day traffic conditions. The transmission’s ASC algorithm can intelligently interpret the engine output needs from the throttle pedal. Optimal engine rpm is constantly maintained. The overdrive button was untouched throughout the test drive. The “Ds” mode has no particular function other than holding the engine at an unwelcomingly high rpm exposing the age of the engine. 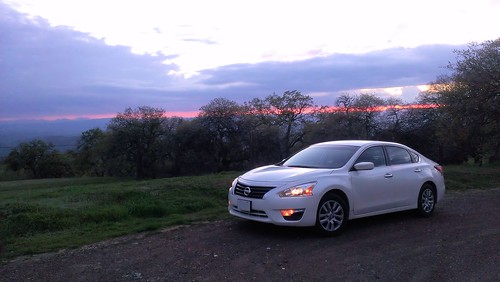 Under spirited driving, pushing at about 75% of the maximum engine load, predetermined gear ratios are used to mimic the shifting shocks of the automatic transmission to artificially create a more welcoming conventional shifting feel. This approach is nicely executed given most people usually drive under 75% engine load 99% of the time. Beyond that 75% threshold, the typical rev hanging CVT behavior is retained. Although this is the most efficient method but this cause grieves and concerns to traditionalists particularly when the cabin is filled with droning engine note.

Nissan did a great job in isolating the engine noise from the passenger compartment up to 75% engine load. When pushed beyond that, at a higher rpm, the mechanical noise is overwhelming. This QR25DE is never meant to be an enthusiastic engine that enjoys high rpm operation but its vintage design just start to get annoying.

Mesh the throttle to the floor letting the CVT rev the engine at its rattling redline, the powertrain is capable of propelling the car from 0 to 60 mph in high 7 seconds, and reaches the quarter mile in low 16s @ 88 mph; all within the current norm of the segment.

Cruising at 70mph, engine speed stays at fairly low 1,750 rpm for a 4-banger to conserve fuel. The EPA rated fuel consumption at 27 city, 38 highway, and 31 combined mpg are in line with our 33.1 trip average while the worst and best at 32.5 and 33.4 mpg, respectively; a 20% increase from the 27.5 mpg average we observed in the L32 under the similar test conditions.

While the curb weight, and engine output identical to the L32, this 20% increase in fuel economy from the CVT rework alone is quite remarkable. Whether you like it or not, CVT is going to stay.