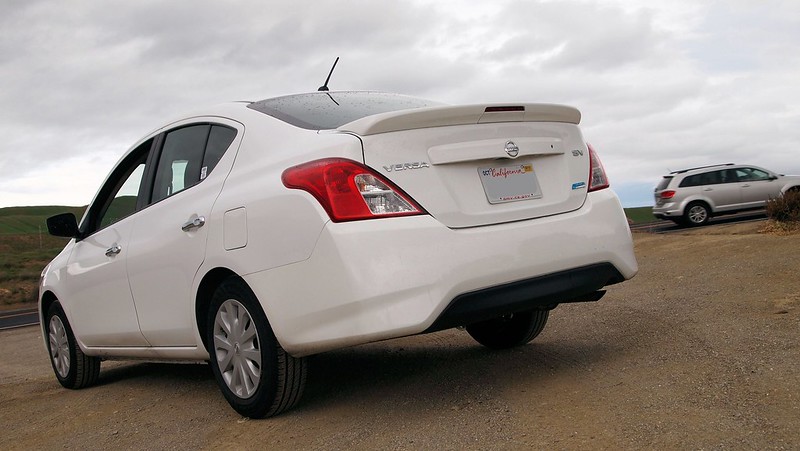 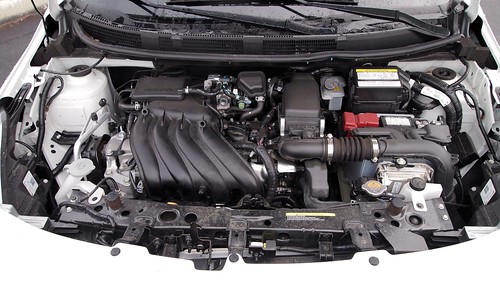 Behind that catfish front fascia is the made in Japan by Aichi Machine Industry HR16DE engine and a Jatco supplied CVT powertrain.

This inline-4 engine consists of 78.0 mm x 83.6 mm undersquare bore-to-stroke layout totaling 1,598 cc in displacement and 9.8:1 compression ratio. Each cylinder is served by 4-valves that are controlled by dual overhead camshafts with hydraulically activated Continuously Variable Valve Timing Control System (CVTCS) on the intake and exhaust cams. Fueling is provided by port mounted Dual-Injector System (DIS) in lieu of a traditional single-injector per cylinder design. Nissan claims the DIS offers about 50% finer spray to enhance complete combustion and reducing the use of rare metals in the catalytic converter to treat gases emitted by incomplete combustion. 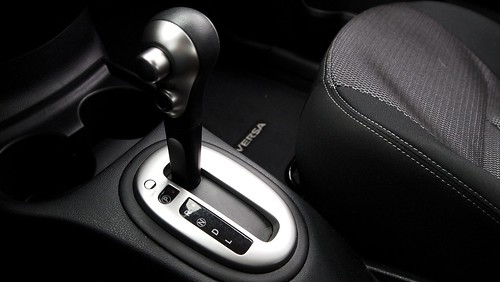 Mated to the engine with commuting duty in mind is the D-Step Xtronic CVT driving the front wheels. Compare to the previous CVT design, Nissan claims this unit has 30% less friction, 13% lighter, 10% smaller, and utilizes planetary gearing to improve efficiency. Gear ratios are now widened, range from 4.006 to 0.550 with 3.754 final drive to enhance acceleration and fuel economy; previous Versa CVT 2.561 to 0.427 with 5.473 final drive. Cruising at 70 mph, engine now revs at 2,250 rpm.

On the road, the “rubber band” effect from the previous CVT has been noticeably improved; it now mimics more or less like a conventional automatic transmission under most operating conditions. Its Adaptive Shift Control (ASC), similar to the ’15 Nissan Altima, senses the throttle input and engine load and instantaneously changes the gear ratio to keep engine rev at the most efficient RPM.

There is a spot at the bottom of the gas pedal acting like an old-school kickdown switch. Under pedal-to-metal condition, engine note drastically changes follow by another subtle-at-best surge of acceleration. The used to be mellow engine roars like a car with open element short-arm air intake as the intake manifold switches to shorter path. The machinery comes from CVTCS maxing out on the durations on the camshafts to fill up these combustion chambers up with air and fuel mixture. Engine note is thrashy at best.

This throttle tuning offers the sense of linear modulation but only beyond the initial pedal travel. The tip-in is hard to get used to. It is aggressive and has a mind of its own. Say driving in the parking lot or in traffic jam barely touching the pedal follow by a release to just get the car to move a bit. Under normal circumstance the car should slow down momentarily after the pedal is released due to drag and friction. But the Versa will maintain that speed for a second or more on its own as if your foot is still on the pedal. This potentially is a safety mode to enhance longevity for the planetary gearing in the CVT. This behavior is just not right. 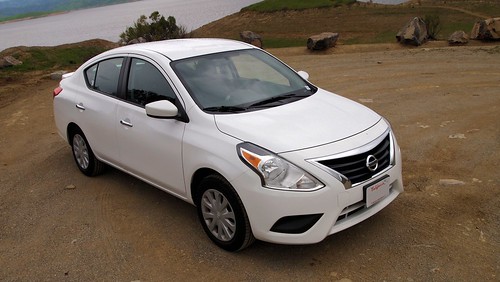 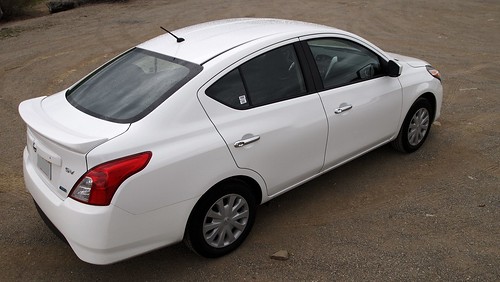 On paper, the powertrain propels the car from 0-60 mph in high 9 seconds and quarter mile in mid 17s at 80 mph. The performance figures are mind-numbingly boring but the well-integrated powertrain saved the day, and alleviated our initial concerns of it’s performance in the real world. We once swear that the minimum engine displacement in the U.S. should be 2.0L. Anything less is a complete underdog. However, on the road it revealed a new story. Its performance seems to be equivalent to or better than our Versa with the bigger 1.8L engine.

First, how can a smaller displacement engine equate to the bigger engine’s performance? Nissan has done a good job in dropping the curb weight by 114 to 2,468 lbs in the SV trim. In today’s safety regulations: 5-mph bumper, eight airbags, crumble zone, side impact structures…etc, for vehicle remain below 2,500 lbs is not an easy task in the cost oriented subcompact segment where lighter but more costly material such as aluminum is avoided.

Secondly, performance is benefited by CVT’s willingness to keep engine RPM at peak output, and the HR16DE is also tuned in flavor of torque at the lower revs where it now peaks 200 rpm sooner. Overall a more responsive powertrain than the C11. On the pancake flat I-5, the Versa offers acceptable level of passing power. At HWY 152 through Pacheco Pass to I-5, it has adequate power to maintain at speed limit plus some for the incline. In the forever congested Los Angeles traffic, the Versa simply fits in perfectly. 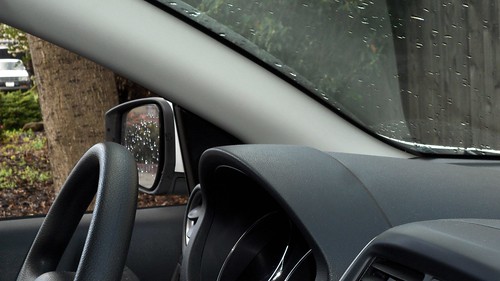 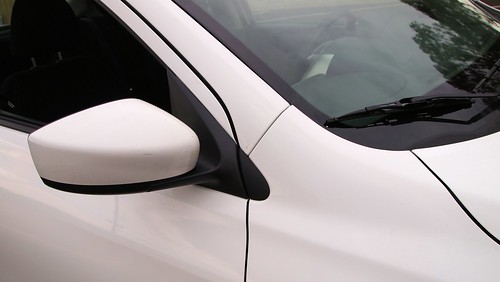 This lightness, the aforementioned streamline body, and the wider gear ratio should academically mean reduction in fuel consumption in the real world. EPA rated it at 31 City, 40 HWY, & 35 COMBINED mpg representing close to 30% increase in fuel efficiency compare to C11. During our test, the instrument panel consistently reported 40 mpg average. However, our trusted method of hand calculation unveiled disappointing 31.48 mpg as the trip average; a 20% discrepancy. Bad fuel?

Light curb weight benefits lighter and simpler use of suspension design and components is a known fact. Like all subcompacts, independent MacPherson strut front and torsion beam rear suspensions found in the Versa’s V-platform; a platform will soon 27 architectures. A 23mm stabilizer bar in the front and a 22.2 mm bar integrated at the torsion beam at rear. 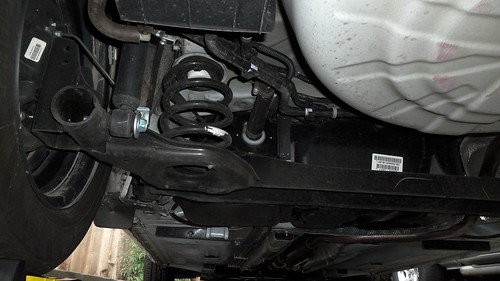 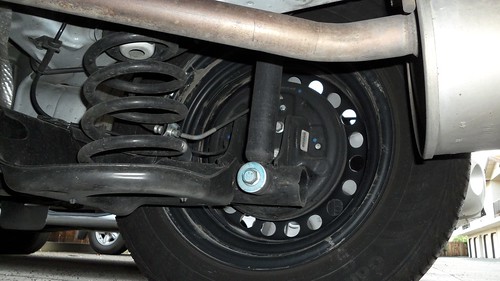 The steering ratio is now at 16.8:1, a more conventional ratio and with a natural 2.96 turn lock-to-lock than last generation’s commercial truck like 18.3:1, and 3.25 turns. A good indication that electric power steering (EPS) technology has further advanced to allow for shorter ratio to work; as shorter ratio requires more energy from the EPS motor. Other than that this column-mount EPS received no other new engineering achievement. The entire steering experience is just as poor as the first generation.

The on-center feel is very vague. Weight gain is nonexistent. Steering effort is extremely light. Under this type of scenario, the steering should be dead nonetheless road information transmitted to the wheel is actually plentiful. The quality of the information is delayed and the driver has no use of them. In digital language, they are considered as noise. To tune this out, just pretend the steering wheel is a vibrating hand massager.

The steering is an absolute turn-off. This is inappreciable since there are some very good EPS in the market; take a look at the ’13 Toyota Yaris. 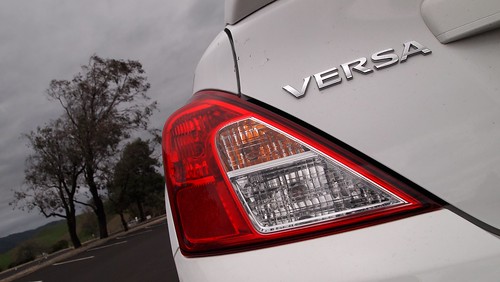 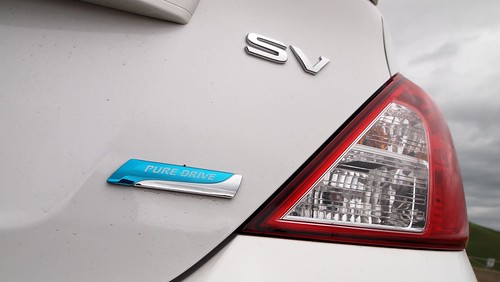 Contact patch is provided by a set of 185/65R15 Continetial ContiProContact grand touring all-season low-rolling resistance tires on soft steel wheels. The tall sidewall also contributed to the vagueness in the steering compartment. The ContiProContact has been around for a long time. It was the OEM equipped tires on the C11. It has impressed us since day one. It offers decent amount of grips, quiet and no complaining howl when push hard. Hydroplane resistance is good even in a severe rainstorm during our test.

The suspension tuning mimic’s the Altima’s subtly supportive yet highly comfortable scheme. It retained little hints of good old Nissan playfulness. On the windy and hilly HWY198 from I5 to US101, the Versa’s handling attribute doesn’t embarrass despite its disappointing 0.76 lateral g-force. There’s a delay in initial turn-in as the sidewall need to flex before lateral force can be apply to the ground. Once this delay is passed, Nissan’s preeminence in chassis tuning is apparent. The car just grips through the turn, and the rear end is tuned for agile rotation to follow the front end minimizing understeering. Body roll is apparent at initial turn-in but its stable once settled. 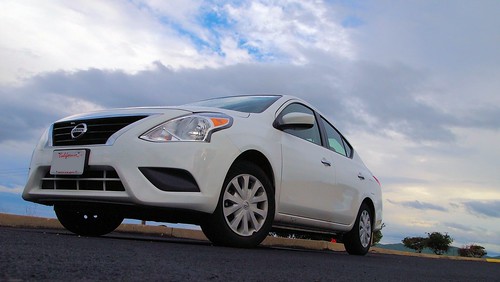 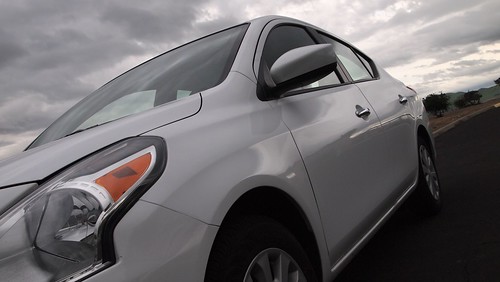 The Versa can still be a fun momentum car to toss around despite its lackluster styling and simple suspension design. The Vehicle Dynamic Control (VDC) threshold is high in default mode. No evidence of different driving feel whether the VDC is on or off.

Another rather significant issue is crosswind under high speed driving. Combine with bad steering, the once applauded light curb weight and high profile, the car is subject to the effect of the crosswind and have a hard time going straight. Thus takes a lot of focus from the driver to stop the car from wandering. It is very tired-some to drive it for a long haul. 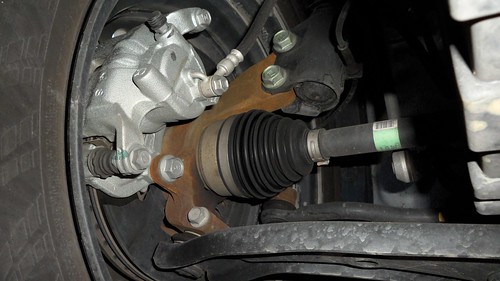 Pedal modulation is good, and retains the text book Nissan standard greatness in feel. Under emergency braking, braking distance feels longer than expected as heavy nose dive cause the rear drums to lock up rapidly and ABS has to involve to save the day, which is confirmed by the lengthy 179’ stopping distance from 70 mph. No brake fade was experienced.

Afterthought – Get one with European Hot Hatch DNA 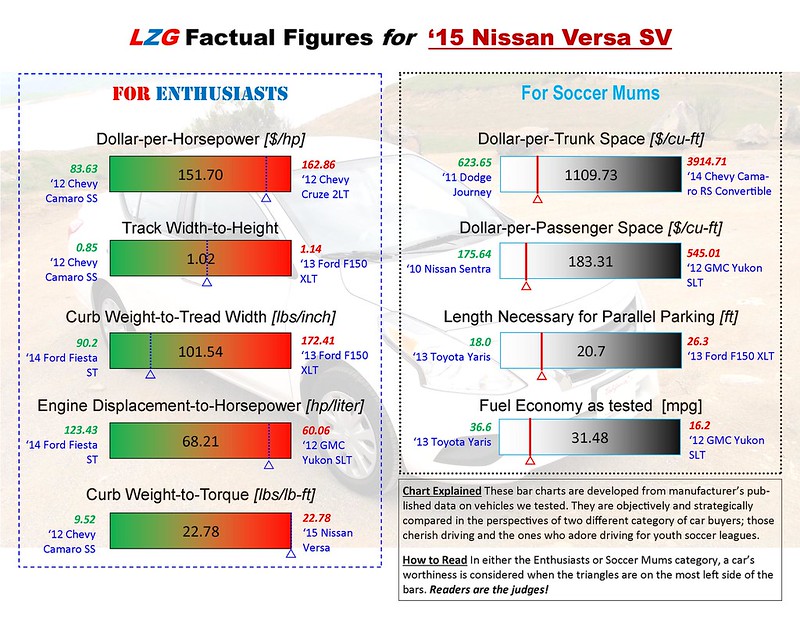 Nissan once again obtained the least expensive new car title in America with the Versa S. As of spring of 2015, one can get an untouched virgin, brand spanking new car for the price of a well abused 2012 Honda Fit. Not to mention from time to time there are 0% APR financing deals around. In the perspective of basic mode of transportation, the Versa S is quite an attractive option. Just beware that obtaining the basic amenities that reflects calendar year 2015, the MSRP picks up quickly. For our tester’s $16,500 MSRP, we recommend taking a look at the 2015 Ford Fiesta SE Sedan with the 1.0L Ecoboost engine. LZG 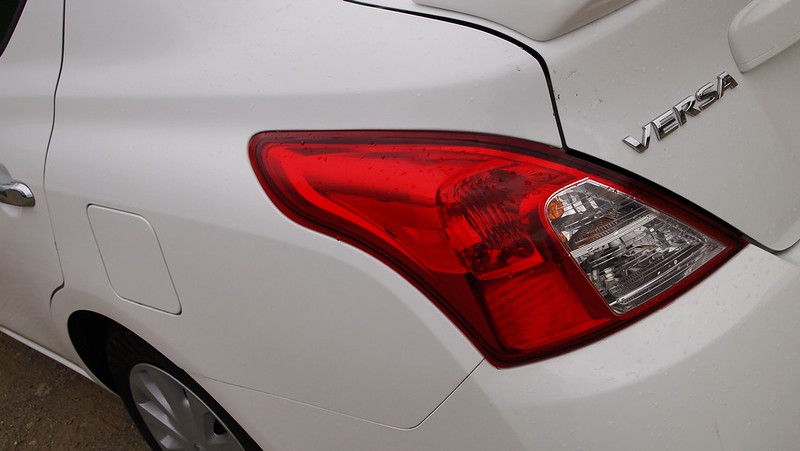